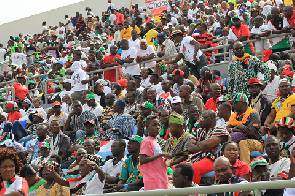 According to him, the members of NDC went to Cape Coast to have fun under the pretext of launching campaign which intends to offer hope to the many suffering Ghanaians.

He observed that protocol was jumbled, saying it was wrong for ace Actor John Dumelo to talk before the Vice President Amissah-Arthur.

The Acting General Secretary of NPP said they are not moved by the massive crowd that turned up at the NDC campaign launch.

‘It appeared like they planned to go on a three-day merry making in Cape Coast by busing people to the stadium to eat and drink, it was a normal jamboree of giving people money and t-shirts, we are not worried about the number. They were all struggling to assure people that they will create employment, you can see clearly that change has really come,’ he claimed.

Former JJ Rawlings during the party’s campaign launch advised the NDC not to underrate NPP.

Speaking on Abusua FM’s Abusua Nkommo hosted by Kwame Adinkrah, Mr. Boadu stated that the former president knows that the NDC will lose the 2016 elections, hence his caution to the NDC to be weary of NPP.

‘Politically, former Rawlings has been observing activities, he has seen that the NDC will lose the elections, he said he will only talk after the NDC loses, he will tour the country to explain things that led to their loss, he said the NDC has lost track of their values, founder of the party he couldn’t even endorse Mahama not to talk of telling people to vote for him, his words are instructive,’ he said.

He wondered why some key members of the NDC were missing at the campaign grounds.

‘They are only tickling themselves, by writing exams and marking the papers themselves, NDC members are worried that we members of NPP have ceased fire, they are disturbed that we don’t fight ourselves anymore, they always pray for confusion in our party everybody is working assiduously and that is their headache,’ he explained.

He said President John Mahama and his NDC supporters have no message for Ghanaians and that they prefer telling lies than accepting truth.