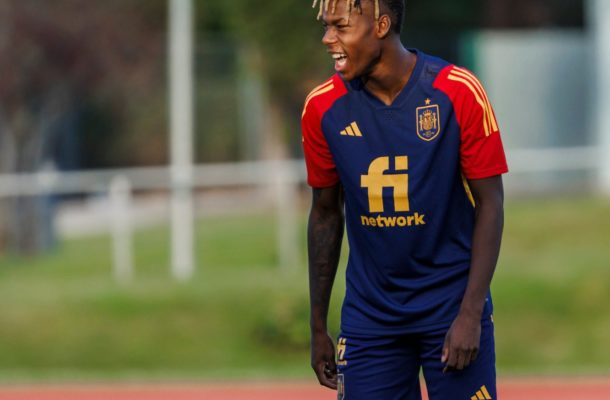 Head coach of Spain, Luis Enrique says that the national team call-up of Nico Williams is not to prevent him from playing for Ghana.

Nico Williams is the younger brother of new Black Stars striker Inaki Williams and was on the horizon of the Ghana FA after his brother switched nationality.

In July this year, Inaki Williams decided to switch nationality to play for Ghana after turning down Ghana several times and making a single appearance for Spain.

In an interview ahead of the friendlies, Enrique revealed his decision to call up Nico while rejecting claims of trying to block a possible move to switch to Ghana.

“I’m not doing this to stop him from going with Ghana; he’s young and a very interesting player,” he said as quoted by the Guardian.

Spain has a habit of acting fast on players who have dual nationality and can represent other nations as was the case of Munir El Hadadi in 2014.

El Haddadi was born in Spain to a Moroccan father and played for the European country’s U19 and U21 teams before he was handed a call-up to the senior side in 2014.

He made just a single appearance for Spain playing against Macedonia in a Uefa Euro 2016 qualifier and featured for only 13 minutes in the encounter.

It had to take a FIFA rule change for him to feature for Morocco due to that 13 minutes of football he played for Spain in 2014.

Wolves winger Adama Traore was also in line to play for Mali before Spain called him in order to prevent him from representing Mali.