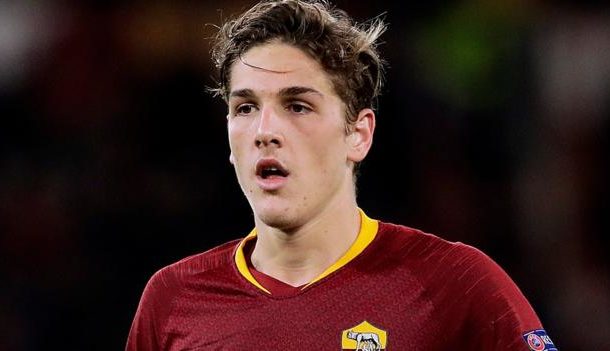 Zaniolo (right) played in both Champions League games against Real MadridEvery week the BBC Football Daily Euro Leagues podcast panel will select a promising 'wunderkind' to focus on. This week our subject is... Nicolo Zaniolo
You have to be a special talent to make your professional debut in the Champions League against holders Real Madrid.
Roma's 19-year-old midfielder Nicolo Zaniolo did just that in September, having been picked in the Italy squad at the start of the month before even making his first senior appearance.

The teenager stands at at 6ft 3in (1.90m) and is widely regarded in his homeland for his passing ability and keeping possession of the ball.
Signed by the Serie A side as part of the deal which saw Belgium midfielder Radja Nainggolan join Inter Milan, Zaniolo has broken through at the Stadio Olimpico this season, going on to make 11 appearances in all competitions.
His former Inter coach Stefano Vecchi says Zaniolo will "go places" and has likened him to a "Steven Gerrard, Frank Lampard type player" and he will turn into some player if he takes after either of those two Englishmen.
But praise does not come any higher than Roma legend Francesco Totti, who said Zaniolo "plays like a veteran".
Roma's record appearance-maker and highest goalscorer Totti added: "He has explosive strength and technique, and everything it takes to become a truly great player. Don't let him hear me though. He may yet change course and I don't want that on my shoulders." Meet some more wunderkinds...

Euro Leagues podcast analysis - 'Calm and composed'
Italian football expert Mina Rzouki: "If Roma can do one thing, that is uncover great talent. They have Monchi as their sporting director and he is very good at doing just that, he did it at Sevilla too.
"Zaniolo is a trequartista, he is someone who plays in the hole in attacking midfield. He is turning out to be an exceptional talent and, most importantly, youngsters these days have to suffer so much pressure but Zaniolo can stay composed and can do the basics even when there is huge pressure in an anxiety ridden game and if the opponent is intimidating.
"The most important game so far has been the second game against Real Madrid. He held off all the pressure to deliver the beautiful pass for the miss of the season by Cengiz Under. Have a look at it on YouTube.
"He was called up to the Italy national team by Roberto Mancini despite never having played a single game in Serie A. That is how highly regarded he is in Italy.
"He is somebody who is precise and quick in his passing. His decision-making is exceptional, he understands how to keep hold of the ball and is physical and big enough which means it is difficult to dispossess him.
"You have to foul him to get the ball and he will shell out assists and dictate the pace of the game. He will look to see who is free and reads the game like a veteran despite being only 19. He wants to fight until the final whistle and feels his team has a chance.
"Even if the press try to ask him difficult questions, he answers in a calm, composed manner. He is being given a chance because of Roma's injury problems and is making use of it."Source: bbc.com