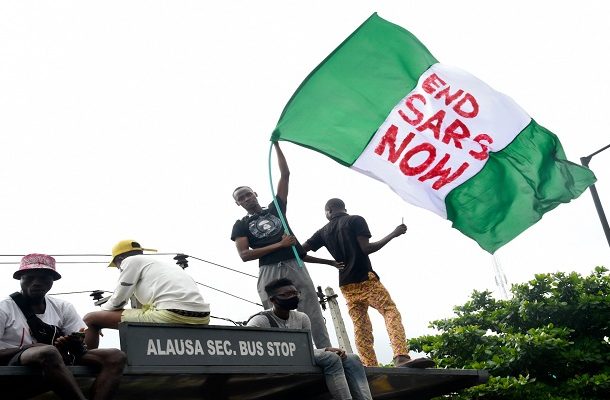 People hold banners as they demonstrate against police brutality in Lagos, Nigeria

The National Broadcasting Corporation (NBC) in Nigeria has fined three TV stations in the country: Channels TV, Arise TV, and AIT TV over alleged unprofessional coverage of the #EndSARS protests and the subsequent violence that recently ensued in Nigeria.

The three stations were fined 3 million Naira (near $8,000) each. In this age of free press, this is unacceptable. Such actions as these are a threat to press freedom in Nigeria. NBC should therefore withdraw the fines.

Nigeria has had a long history of suppressing the press and harassing journalists. During the era of military rule, journalists were attacked, harassed, jailed, or worse, killed as with Dele Giwa while several others were forced into exile.

Even though President Muhammadu Buhari often brands himself as a reformed democrat who respects the press and its duties to ensure true democratic change, Nigerian journalists are still often harassed in the course of doing their work.

According to Reporters Without Borders’ 2020 World Press Freedom Index, Nigeria ranks 115 out of 180 countries with only a slight improvement from its 120th position in 2019. Between January and August 2020 alone, over 40 attacks on journalists in Nigeria have been recorded, a new analysis by the International Press Centre (IPC) has revealed.

Nigeria’s NBC which was set up in 1992 as a regulatory body for broadcasting companies in the country is also gradually becoming a tool for gagging the press and trampling of the press freedom in Nigeria with its arbitrary sanctions and fines.

Earlier in August, the corporation increased the fine for hate speech from 500,000 to 5 million Naira ($13,000) as part of the amended Nigerian Broadcasting Code. That same month, it placed a 5 million naira fine on Nigeria Info, a radio station, for airing an interview it considered “inciting” and in violation of its code.

How is covering a protest supposed to be a crime?

Young Nigerians had taken to the streets to register their displeasure against wanton police brutality and harassment by the notorious Special Anti-Robbery Squad (SARS) of the Nigerian police force. These protests which gained traction across the country and in the diaspora took a sorrowful turn when soldiers opened fire at peaceful protesters at the Lekki Toll Gate in what is now known as the #LekkiMassacre.

But rather than condemn the unjustifiable killings of innocent youths and praise several journalists who despite the risks continued to cover and report on these incidences of violence, NBC is imposing a sanction.

Just like the fine, it placed on Nigerian Info, this is arbitrary and unwarranted. It is a threat to press freedom in Nigeria and it highlights how state actors often use the instrumentality of regulatory bodies or regulations as a mechanism to shrink civic space and stifle freedom of expression and of the press.

This sanction should therefore be reversed. If it is allowed to stand, it portends a worrisome outlook for press freedom in Nigeria.