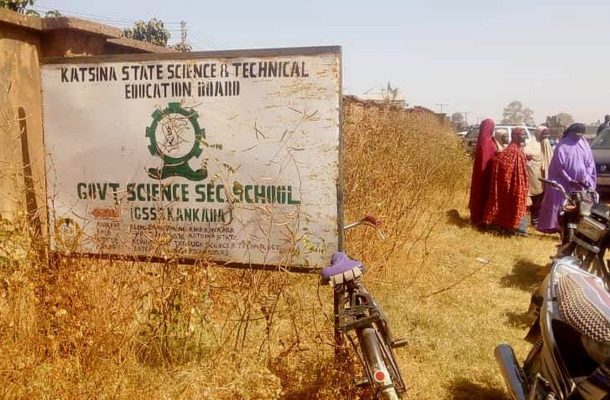 Hundreds of students are feared missing after gunmen raided a secondary school in north-western Nigeria.

The attackers arrived on motorbikes and started shooting into the air, causing people to flee, witnesses said.

They targeted the Government Science Secondary School – where more than 800 students are said to reside – in Katsina state on Friday evening.

On Saturday, the military said it had located the gunmen’s hideout in a forest and exchanged gunfire with them.

The outcome was unclear but officials said there were no reports of students being injured.

Meanwhile, Nigerian President Muhammadu Buhari condemned the attack and ordered the school to carry out a full audit of students to find out how many are missing. Parents who dashed to the school to take their children home were also asked to notify the school authorities.

Residents living near the all-boys boarding school in the Kankara area told the BBC they heard gunfire at about 23:00 (22:00 GMT) on Friday, and that the attack lasted for more than an hour.

Security personnel at the school managed to repel some of the attackers before police reinforcements arrived, officials said.

In a statement on Saturday, police said that during an exchange of fire, some of the gunmen were forced to retreat. Students were able to scale the fence of the school and run to safety, they said.

About 200 students who had fled – and were initially deemed missing – later returned. However, witnesses said they saw a number of students being taken away by the gunmen.

One police officer was taken to hospital after being shot and wounded, police said.

Several local residents on Saturday said they had joined the police in searching for the students who remained missing, while many parents said they had withdrawn their children from the school.

“The school is deserted, all the students have vacated,” one witness, Nura Abdullahi, told AFP news agency.

“Some of the students who escaped returned to the town this morning, but others took a bus home,” he added.

The governor of Katsina, Aminu Bello Massari, has ordered the immediate closure of all boarding schools in the state.

Katsina is the home state of President Buhari, who is currently there for a week-long private visit.

“I strongly condemn the cowardly bandits’ attack on innocent children at the Science School, Kankara,” he said in a statement. “Our prayers are with the families of the students, the school authorities and the injured.”

The attack on Friday came two days after the kidnapping of a village leader and 20 others in another part of the state.

In 2014, more than 270 girls were kidnapped by the militant Islamist group Boko Haram from a school in the north-eastern Nigerian town of Chibok.

No group has yet said it carried out the raid on the school in Katsina, which is far from Boko Haram’s usual area of operation in the north-east.