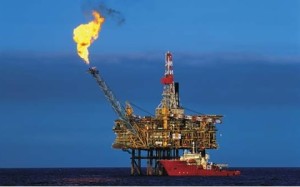 The  passage of  the Petroleum Production and Exploration Bill  into law by Ghana's parliament has been hailed by some   Nigerians, describing the move as "a regional triumph".

Nigeria's Nation Newspaper report suggests the World's leading oil producer  is  fascinated about the swiftness with which Ghana, a country that only found oil 9 years ago,  managed to pass the bill into Law as Nigeria keeps fumbling with the passage of her - Petroleum Industry Bill (PIB).

With the discovery of larger commercial quantities of oil and gas in deep water offshore Ghana, It became necessary for the bill to passed as the new  phase of oil exploration  has comes with new challenges with  actual development, production and utilisation of its oil and gas resources.

On August 4 th, The Petroleum (Exploration and Production) Bill, 2016, was passed into law, after a long and extensive consultative process, aimed strengthening  and improving  the legal environment governing the exploration and production of fossil fuel.

An  editorial session titled "Ghana first", in the Nigerian newspaper commended the Ghanaian authority for having the foresight to passe the bill into law, while their country dither.

"An interesting thing about the development is that before now, the country’s petroleum industry had a 1984 law which regulated the sector; but the country still felt the need to rework the law to, as the energy minister, Emmanuel Kofi Armah Buah noted, make it tighter and to reflect international standards and best practices." The article reads.

"With this development, Ghana has sent a message to the international community that it is set to encourage multinational corporations to do business with it as well as attract more investment into the industry."

The statement furher ask President Muhammadu Buhari  to send an executive bill on PIB to the National Assembly to enable the legislators deliberate extensively on it and be able to pass it so it does not end up coming too late for the legislature to work on, as was the experience in the 7th assembly.

Ghana’s passage of its own petroleum bill should serve as a wake-up call on the National Assembly to do not just the needful but the rightful on this all-important bill when it eventually comes. The PIB is too important to be trivialised or politicised.

key highlights of the Petroleum Production and Exploration Bill

1. Management and Exploitation of Petroleum Resources
The overarching principle that the management of petroleum resources should be conducted in accordance with principles of good governance and transparency, for the maximum benefit of Ghanaians is a theme that runs through this Bill. It is expected that a contractor will develop and produce petroleum in accordance with international best practice to avoid waste and ensure the long term recovery of our petroleum resources.

2. Conducive Environment for Investment
The Bill creates an attractive environment for potential investors to participate in the sector by providing certainty and transparency in the ground rules for operations. Open, transparent and competitive public tender processes have been introduced to precede the entering into of a petroleum agreement. This process which exists under PNDCL 84 has been further expanded to include the requirement for the Minister to publish an invitation to tender or an invitation for direct negotiations in the Gazette and at least two state owned national newspapers or any other medium of public communication.

3. Minimum Work Obligation During the Exploration Period
The Bill introduces an obligation to commit a contractor who fails to fulfill either in whole or in part, the minimum work obligation agreed under a petroleum agreement during the exploration period to pay to GNPC the amount required to complete the unfulfilled portion of the work program for that working period.

4. Petroleum Register
The Petroleum Commission is required under the Bill to establish and maintain a petroleum register of petroleum agreement, licences, permits and authorisations and the register shall be open to the public. This provision further deepens the Bill’s approach to transparency.

6. Use of Ghanaian Goods and Services
Persons engaged in petroleum activities shall acquire materials, equipment and consumer goods produced or provided for in the country by an indigenous Ghanaian company of similar quality and cost to foreign material or goods. They are also required to contract local service providers to the extent that the services they provide are similar to those available on the international market.

There is no doubt that this new law will have a positive impact on Ghana’s economy.

The petroleum industry will be a significant source of revenue for the Government of Ghana in the form of royalties, income and capital gains tax, participating interest and bonuses. The provisions of the Bill seek to consolidate these sources of revenue into law rather than to leave them to be a subject of negotiation in petroleum agreements. Revenue so derived, will support the nation’s industrialisation and growth strategies, whilst creating jobs for Ghanaians, thereby contributing significantly towards the alleviation of poverty in Ghana.

The Bill which provides transparency and certainty will also encourage increased investments by international oil companies thus leading to an increment in capital inflows.

The provisions on local content and local participation in petroleum activities as well as a Local Content Fund will lead to job creation and the building of indigenous capacity, which will enable Government achieve its objective of ensuring that the nation’s petroleum resources are harnessed for the benefit of all Ghanaians and thus ultimately improve the standard of living of the ordinary citizen.