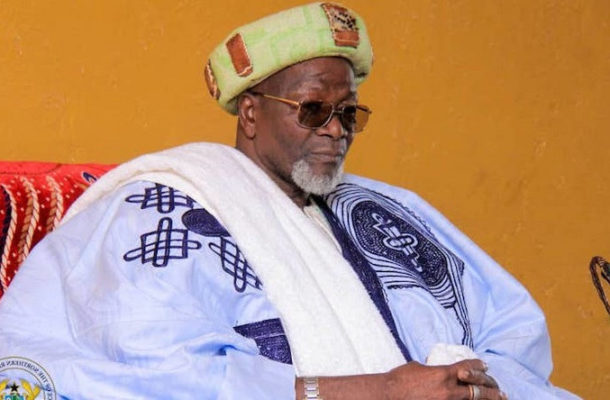 In the olden days, the Ya Naa, and for that read the Awoamefia, the Dormaahene, the Ga Mantse, the Okyehene – in those days of yore, the Ya Naa was HEAD OF STATE, he was PRIME MINISTER, he was CHIEF JUSTICE, he was the ARMY COMMANDER, he was, in the words of Louis XIV King of France, “JE SUI L’ETAT” ( I AM THE STATE!!!!)

Today, the Head of State of GHANA made up of several communities is in Jubilee House, who is Head of Government. The Chief Justice is at the Supreme Court in Accra and the Army Commander is at Burma Camp.

To be brutally frank, who are you? Somebody, yes, but in fact, NOBODY!!! The Omanhene of Acherensue, working in private life as a University Professor at KNUST, Kumasi was arrested charged and tried for MURDER, but the jury found him Not Guilty. I myself, Captain(rtd) Nkrabeah Effah Dartey, an Accra lawyer, successfully accused the Omanhene of Edina Traditional Area of Contempt at the High Court, Cape Coast and he was sentenced to pay a fine or go to jail.

In the name of academic freedom, allow me to ask this question: let us imagine that you a police lance corporal, in uniform, walking the streets of Kumasi, thinking about your pregnant wife on admission in hospital, then suddenly you see a powerful BMW clearly driving through red light in traffic, then you stop the car, you walk to the car – he pulls down the glass, and you look in horror to see the all too familiar face of OTUMFUO the ASANTEHENE……………………

We have a problem on our hands

According to newspaper reports, the widely known YA NAA, overlord of the Degbon Kingdom, based in Yendi, Northern Region, allegedly ordered the Police Divisional Commander to leave the traditional area within TWO HOURS !!! Upon receipt of these marching orders, the reports say, allegedly, the Police Divisional Commander questioned: WHO IS THE YA NAA?

Since the beginning of civilization, all human authority is exercised through STRUCTURES, systems, ORDER.

There is this High Court Judge I admire so much – Mr Justice Boafo Ackah, GJ 6 – imagine him telling you, at the premises of Melcom supermarket, that for doing something wrong, you should go to jail for three months. Nobody will mind him. They might even question his sanity. But, if he wears his gown, and wig, and sits in GJ6, Accra High Court, surrounded by police and Court clerks and lawyers, and says “go to jail for 3 months”, you will be whisked straight to Nsawam Prisons, as a convict.

IT IS ALL A QUESTION OF STRUCTURES, SYSTEMS, ORDER. The Inspector General of Police, whoever it is, has posted Mr A to Yendi, to work as Police Division Commander, and he is at post, working, then you say you are YA NAA, so you have given him 2 hours – just 2 hours, to leave Yendi?

With the greatest respect, as lawyers would say, WHO ARE YOU? I began this article by saying that in the immediate past, our chiefs, all over the land, were almost demi-gods, capable of sentencing people to death and executioners (abrefoo) carrying at the execution. The came colonial rule, with a white man out the Christiansborg Castle at OSU, Accra, ruling us, in the name of the Queen of England.

The colonial authority took away ALL the functions of the chief, “Head of State”, “Prime Minister”, “Chief Justice”, “Army Commander” – ALL were taken away. What was left, if at all, is the head of the religious rites, which was dubbed PAGANISM.

And so, today, the reality on the ground is that if you are chief, yes, you are SOMEBODY, worthy of respect, but when the chips are down, the brutal truth is that you have to find your own level.

“finding your own level” means operating through STRUCTURES, SYSTEMS, ORDERS. Don’t drive a BMW passing through red light intraffic, saying you ae chief. Don’t do procative acts against the law. Hide in the Palace. Be as inaccessible as possible – not standing at petrol filling station holding polythene bag. No.

The judicial service staff association held a big conference in Accra and invited the Ga Mantse, Nii Ameyi, to come as chairman. At about 10 o’clock, the General Secretary of JUSSAG came to the entrance of the Supreme Court, and out of desperation he waved his hand in open air, fining: “Ga Mantse at all, what is wrong with him? We invited you for 9am and its now 10.30am why?

After such a disrespectful outbunt, a man in cloth came to tap his shoulder – please, that is Nii Ga – he has been standing here for two hours!!!!!!!!!!

By contrast, I invited Otumfuo Opoku Ware, Asantehene to be the chairman at the Opening Ceremony of Petroleum Retailers Association Annual Conference in Kumasi Polytechnic. As the Executive Secretary I was busily putting finishing touches to arrangements when the National President came – “Captain, Otumfuo says he is not well, so he has sent Kokofuhene to represent him and he has come already – hurry, Cap………”

I protested “But Mr President, we said we will start at 10 o’clock” The National President, an Ewe, was unrelenting ”Hurry, Captain – you know these Ashanti chiefs – please…………” I rushed to the rostrom – please, everybody get seated. I hear Otumfuo’s representative has come”.

Reader, you can’t believe it . I rushed to the offices where the Kokofuhene was waiting. I saw six well dressed noble chiefs, each in resplendent rich cloth. I did not know the Kokofuhene myself, so I was confused. I decided o speak to the nearest chief: “Please, I am the Executive Secretary. We are ready for the Opening Ceremony………”

“You have to wait. Kokofuhene has NOT come yet. We are only his ADVANCE PARTY!!!

About six years or so ago, the current Omahene of Berekum Traditional Area, my hometown, gave some order to nationalize trading on the high street of Berekum. One irate trader openly fumed to several people: “who is the so-called Omanhene? I am not going anywhere”

When Nana heard of this arrogant affront t o his authority, he quietly invited the Police Commander to the Palace, had a little chat with him, and he also quietly sent word to the District Magistrate.

Two days later this irate trader was “invited” very politely by a uniformed police constable to follow him to Berekum District Court – he was charged with some offence and straight away the Magistrate remanded him in prison custody for two weeks.

In those days, the Twafohene, my younger brother, was the publically acknowledged eyes and ears of the Omanhene. So, delegation and relatives and wife of the remanded trader came, pleading, that talk to the Omanhene to withdraw the case………….

You are Ya Naa. Who in Ghana does not know you? The way things are going, you are not happy with the Police Divisional Commander. Very well. Why not call the IGP?

“Morning Sir. This is the Ya Naa, Andani Mohammed, speaking from Yendi.”

“Morning, morning. Nana. How is Yendi? I hope no problem…….

“IGP, I am not happy with your Divisional Commander……….”

The IGP is a lawyer by profession. He knows he was not made IGP by the Ya NA, but he respects ALL CHIEFS. He will NOT change any of his commanders on a mere phone call, but he will send his Regional Commander to cross check, talk to him, and if necessary quietly

do some reshuffle of Division Commanders.

Reader, is that not better than issueing orders that leave my Traditional Area within TWO HOURS?? Even Nana Addo, President of Ghana, cannot go to his hometown, Akropong, and tell the Police Divisional Commander that “you are ordered to leave Akropong within two hours.” He only has to call his Minister of Interior and order him to remove the Akropong Divisional Commander within two hours; whereupon the Minister of Interior will call the IGP and instruct him that the President wishes the Police Divisional Commander for Akropong to be changed within ONE HOUR – period. The IGP will respond “Yes Sir” He will immediately send radio message to the Regional Commander in Koforidua that he wants the Akropong Commander removed within 30 minutes ……and, the Regional Commander will order his man at Akropong: Hand over immediately to your deputy and report to this Headquarters.” Period.

It is all a question of STRUCTURES, SYSTEMS, ORDER…………….”

It is ONLY ALMIGHTY GOD who can do whatever He likes, ANYTIME, ANYWHERE. A certain joker smoked cigarette and foolishly puffed the smoke upstairs, into the air, saying…….”God, this is for you” Almighty God struck him dead, instantly.