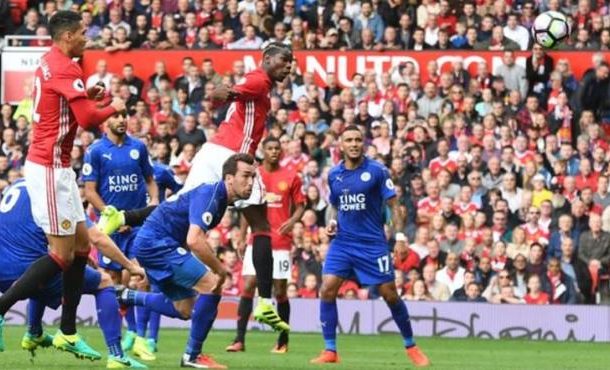 Chris Smalling’s header put United ahead before Juan Mata finished off a slick move with a crisp strike.

Marcus Rashford and Paul Pogba – with his first goal for the club – both scored from corners, with Demarai Gray’s spectacular long-range strike the only consolation for Leicester.

Rooney came on in the 83rd minute.
United’s first Premier League win in a month was sealed by half-time, but a third defeat for Leicester already matches their total for the whole of last season. No Rooney, no problem

Mourinho was true to his pre-match words as Rooney was dropped for a Premier League game for the first time since Boxing Day 2015 – and ended up a spectator for what was eventually a transformed first-half performance.

For the first 20 minutes it may have been more of the same from United, ponderous and slow in their approach, but once Smalling had headed in Daley Blind’s corner the shackles were released.

How much of a difference Rooney’s absence made to their play is hard to quantify, but a 4-0 scoreline at the break was proof enough that the change was justified.

Mata, nominally playing in Rooney’s place behind Zlatan Ibrahimovic, was bright and lively and took his goal superbly before teeing up Rashford for a tap-in, but it was in midfield that the hosts were able to really take a grip of the game as Leicester froze in the headlights.

Rooney eventually came on with seven minutes left, replacing Rashford on the left wing. Where his future role now lies remains a mystery but Mourinho’s decision to leave out his captain could hardly have worked out better. A glimpse of Pogba’s best

United’s first-half performance was their best of the season so far, and went hand-in-hand with Pogba’s finest display since his world-record move to Old Trafford this summer.

He had already played two searching cross-field passes before a flurry of individual highlights as United scored three goals in five dazzling minutes at the end of the first half.

Pogba delivered a disguised chip over the top to Ibrahimovic who volleyed over, fired in a dipping 35-yarder that was well saved by Ron-Robert Zieler, and sliced through a pass that freed Antonio Valencia. The Frenchman then played a key part in Mata’s second before he headed his first goal for the club.

For £89m he is expected to control games, and he did for a brilliant spell.

He was anonymous after the break but the game was already won. Foxes need to fix their defence

Leicester’s shock title win last season was built on the back of the attacking brilliance of Jamie Vardy and Riyad Mahrez, coupled with the work ethic of the now departed N’Golo Kante, but also on a solid defence which conceded just 36 goals in 38 games.

The Foxes won five of six games 1-0 in March and April to move towards the championship as they conceded four goals in seven games.

Yet here they became the first defending Premier League champions to ship four goals in a single half.

What will hurt manager Claudio Ranieri even more is that, apart from Mata’s brilliantly-constructed and taken second goal, the other three were simple goals from corners which could, and should, have been stopped.

The Foxes collapsed after the opening goal and the message was clear at half-time when star men Vardy and Mahrez were taken off, apparently rested for the Champions League date with Porto in midweek.