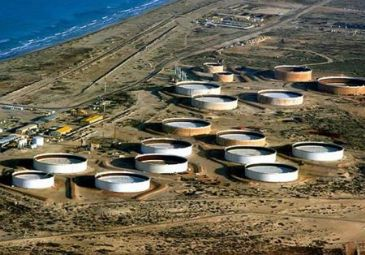 Tripoli—Libya’s top oil man is optimistic that exports could reach up to 900 bpd if all oil terminals were opened and the promises announced last week by the militias blockading them were fulfilled.

Meeting with notables and municipal officials from central Libyan regions including those of Jikharra, Sanalla reiterated NOC’s position is that “oil terminals must be reopened without any pay off and only through official channels”.

The Chairman of the National Oil Corporation (NOC) Mr. Mustafa Sanalla told Reuters on Wednesday "I am always optimistic. The situation is difficult but could be solved."

He said NOC would not lift the force majeure at export terminals unless it received guarantees from all parties that if it was lifted, NOC would not have to impose it again, Reuters reported.

"If we have lifted the force majeure and were not able to export we will be in a very embarrassing situation and we are trying to avoid this to keep the credibility of the NOC intact," he said as quoted by Reuters.

To reopen ports: "NOC will open discussions with our international oil company partners to indemnify NOC from liability before lifting the force majeure."

Sanalla was on a visit to the area to inspect the state of oil installations there and to give thanks to the Municipal Council of Al Jufrah for their latest support for NOC in its rejection of the deal between the UN and the militias Sanalla assured residents in the regions and cities that are in proximity to oil fields and terminals that abiding by the law and helping the government increase oil exports would improve the economic situation in the country.

Al Jufrah’s regional officials and residents were the first to voice support for Sanalla’s strong letter to the UN envoy to Libya Martin Kobler telling him it was a mistake to reward Ibrahim Jadhran, a self-appointed head of the Petroleum Facilities Guard (PFG), for a blockade of the oil ports for almost three years at a cost to Libya of over $100 billion in lost revenue.

Sanalla said the deal included payments that would encourage other groups to disrupt oil operations in the hopes of a similar payout. "It sets a terrible precedent and will encourage anybody who can muster a militia to shut down a pipeline, an oilfield, or a port, to see what they can extort," the letter said.

The Mayor of Jikharra, Ahmed Hammad, told the al-Waset newspaper that the Municipal Council “supports NOC’s decision regarding resuming oil exports under a condition that oil terminals are open without pay offs.”

Hammad told the paper that his municipality’s allegiance is to the House of Representatives and its government in eastern Libya but not to the UN-backed Government of National Accord in Tripoli.

Sanalla told Reuters Libya's crude oil production was now at around 200,000 barrels per day and exports were at a trickle.

"Yesterday the production was 198,000 bpd. We send 100,000 bpd to local refineries and the rest is for exports," he added.
The NOC had said the GNA had released money allowing it to raise production by 150,000 bpd within two weeks. The NOC aims to gradually increase output to 900,000 bpd by the year-endblockading the oil terminals since 2013.