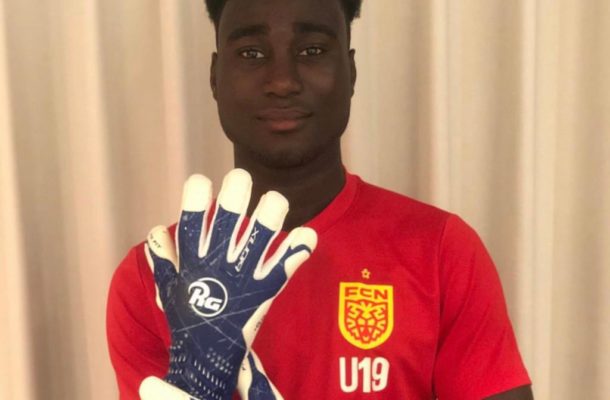 Head coach of Danish Superlig side FC Nordsjaelland, Flemming Pedersen has heaped praises on young Ghanaian goalkeeper Emmanuel Ogura who made his debut last Sunday for the team.

He became the first Right to Dream goalkeeper to play first team football for FC Nordsjaelland . It was a hectic experience for the 19-year-old Ghanaian who conceded five goals on his debut.

But speaking after the game Flemming Pedersen has likened the youngster to Cameroon and Ajax goalkeeper Andre Onana for his attacking sense as a goalkeeper.

There were less than 20 minutes to kickoff when he was told to get ready for the game as number 1, Dudu, got injured during the warm-up and then the Ghanaian goalkeeper had to prepare quickly and pull on the yellow goalkeeper jersey with number 16 on his back.

“I am very pleased with Ogura's performance in the sense that he plays with an offensive mindset. He was already out at the start of the match, actually wildly far out, grabbing a long throw. He put himself in respect and he was not afraid to play with out on the field’

“He is a modern goalkeeper and we call him ‘Mini-Onana’. Obviously, there are times where he got a little at half distance, but that is being worked on. It's always cool for us to see a young debutant from our own academies”