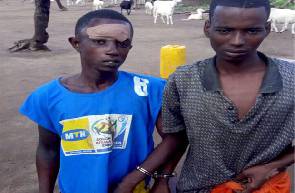 Abubakari Mohammed, 20, and Mohammed Mamudu, 18, have been arrested by residents at Banda Nkwanta in the Bole district of the Northern Region and handed over to the police for robbery.

Information available to Daily Guide revealed that on August 30, 2016 at about 10:30am some passengers on board a mini bus from Banda Nkwanta to Dakope junction were robbed at gunpoint by some armed masked men upon reaching a section of the road near Noyiri.

The armed robbers succeeded in robbing the passengers mostly market women of undisclosed amounts of money and other valuables like phones and jewelries.

DAILY GUIDE gathered that on 31st August, 2016 Abubakari and Mamudu were seen offering a Samsung Galaxy Note 4 phone for sale at the Banda township and in the process of the transaction, the buyer recognized the picture on the phone’s screen saver and quickly alerted some persons and they were arrested.

Some residents gave the suspected robbers a good beating for creating panic in the township and later handed them over to the Bole police patrol team at the Banda post.

According to him, police retrieved the stolen phone and an amount of GH ? 1,000 from a resident who took it from the suspects.

ASP David D. Azumah indicated that the suspects mentioned some names who they claimed were their accomplices and the police will do everything to bring them to book.

He sent a warning to criminals in the area that the police will continue to be on them till they flash them out of the area.

The District Police Commander applauded the residents who arrested the robbers and handed them over to the police and assured them that the police will always be there for them anytime they get any information about criminal activities in the area.