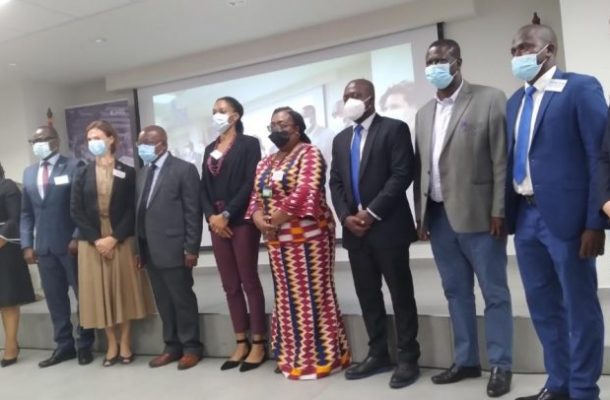 The Ministry of Health (MoH) in partnership with Denmark-based pharmaceutical firm, Novo Nordisk, has launched the Changing Diabetes in Children and the Insulin for Seniors (elderly) programme under the iCARE initiative for Ghana.

The programme is the latest intervention plans by Novo Nordisk in Africa under the global defeat diabetes campaign.

The launch also saw the signing of a Memorandum of Understanding between the Ministry and the Management of Novo Nordisk.
Minister of Health, Kwaku Agyeman-Manu, launching the programme, said the collaboration was in line with the Government’s effort to promote private-public participation in order to bridge the gap in the growing health needs of Ghanaians.

He said it came at the time, when the Ministry had dedicated a lot of resources to COVID-19 management, at the same time addressing the general health needs of the population with people living with diabetes being among the groups at most risk of having complications from COVID-19 infection.

He said the Ministry was keen to collaborate with the private sector to address these major challenges.

He said the event was a continuation of the collaboration between Novo Nordisk, and Ministry of Health, Ghana Health Service, Christian Health Association and the National Catholic Health Service, which started in 2014.

He informed that the Ministry signed a Memorandum of Understanding with Novo Nordisk to work to improve conditions for care for people with diabetes.
“In the past seven years, through the Ghana Health Service, we have collaborated with Novo Nordisk to set up six Diabetes Support Centers,” he said.

The Minister said an additional four Centres had been established in collaboration with the National Catholic Health Secretariat.

He said it was particularly heart-warming to have a Danish healthcare Company continue to support the country’s health sector, following more than 20 years of support to the health sector by the Danish Government.
The Minister said rapid economic growth over the last two decades had changed the burden of diseases and “we now see more Non-Communicable Diseases (NCD) such as diabetes.”

He said the trend was likely to continue, and International Diabetes Federation projected that by 2045, 1.32 million Ghanaians would be living with diabetes.

He said Children with type 1 diabetes was also increasing a challenge, threatening the life expectancy of the young ones.

The Minister said the Federation estimated that there were 1,200 children suffering from diabetes in Ghana and these children needed access to quality care and safeguard insulin to have a good quality of life.

The NCD policy, which is currently with Cabinet, prioritizes health promotion and early detection and health systems strengthening as well as support to children with diabetes.

Vice-President and General Manager, Middle Africa, for Novo Nordisk, Vinary Ransiwal, the said the iCARE initiative had the vision to accelerate access to treatment for patients living with diabetes in Africa in a sustainable manner by leveraging four key areas.

These areas are Capacity, Affordability, Reach and Empowerment thus ensuring more patients will be treated to defeat diabetes in Middle Africa.

He said as part of the defeat diabetes strategy, Novo Nordisk had the ambition to reach 100,000 children globally by 2030.
In Ghana, the programme aimed to improve delivery of diabetes care to children and adolescents with type 1 diabetes in resource-poor settings, working with 17 hospitals to reach 1500 children in a 5 year timeframe.

He said the Insulin for Seniors programme had a similar objective to provide holistic diabetes care and safeguard insulin access for seniors from the age of 60, working with 21 hospitals to reach 2000 elderly people living with diabetes in a period of 3 years.

She said currently the awareness level in the country among Ghanaian parents was low and the programme would seek to address that and equip healthcare facilities with the skills required to make early diagnosis and improved lives.

The Deputy Head of Mission said from the perspective of the Embassy, it was very encouraging to see the commitment of the health authorities to collaborate with the private sector in providing diabetes care and education for Ghanaians.

She said the two countries shared a longstanding well established relations, spanning 60 years of diplomatic relations, adding that in recent years, “our bilateral relations have however, transitioned in line with the overall strategic ambition of government to move beyond aid.”
GNA