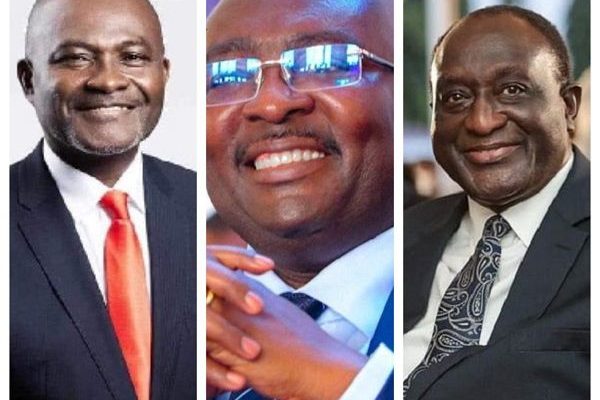 Kennedy Agyapong, Member of Parliament for Assin Central, has restated his commitment to follow through his bid to contest the New Patriotic Party, NPP, 2024 presidential flagbearership race.

He has particularly addressed the challenge posed to his bid by two main aspirants in the persons of Vice President Mahamudu Bawumia and Trade and Industry Minister, Alan Kyerematen.

The two aspirants have yet to expressly state their candidacy in the race expected to be settled in 2023 ahead of the next elections.

“There is nothing electorally fearful about Alan and Bawumia, everyone will have to sell what they have done for the party, if their idea is bought, you move forward. And I know that I have done a lot for the NPP on which basis the grassroots will vote for me,” he said late last week.

Stressing that he was not going to quit the race at the last minute, Agyapong cited a research that showed he was the overwhelming choice of the yuth.

“If I am the choice of the youth, and the youth are going to vote for me, then delegates should look at the youth, 88% of whom have committed to voting for me per a survey. Consider their preference and vote for me,” he stated.

Agyapong, in May this year, publicly announced his bid to lead the NPP in the 2024 polls.

He said if the governing party wants to “break the eight” as their mantra for 2024 suggests, then they must break the eight with Kennedy Agyapong.

"Yes, it is true. I have decided that when the NPP opens nominations, I will pick a form and file my nomination to contest the party primaries as the flagbearer…I will stand on the ticket of the NPP and nothing will change," Kennedy Agyapong said in a Facebook live interview with The Announcer Newspaper, Wednesday, May 26.

Other contenders – rumoured and announced

There are other contenders in the race to lead the NPP. Two on record to have declared their intentions are former NPP General Secretary, Kwabena Agyapong and former Energy Minister, Boakye Agyarko.

The Agric Minister is also rumoured to be lacing his boots to contest as is Joe Ghartey, one-time Attorney General and Railways Minister.