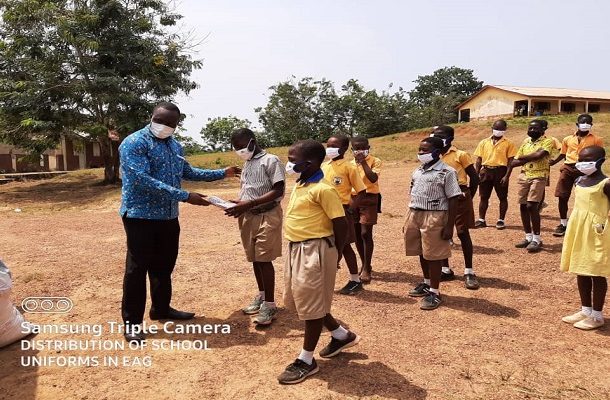 The Constituency Executives of the governing New Patriotic Party (NPP) in the Evalue-Ajomoro Gwira of the Western Region have commended the Nzema East Municipal Chief Executive (MCE), Hon. Frank Okpenyen for lobbying for the Nsein community to get so many developmental projects.

According to the Evalue-Ajomoro Gwira NPP, it is unfair for anybody to say since Hon. Frank Okpenyen became the MCE, the Akufo-Addo-led government has not done anything at Nsein and its environs.

Disclosing some of the developmental projects through the efforts of the MCE has done at Nsein community to this reporter, the Deputy Constituency Secretary who hails from Nsein, Mr. James Kainyah said the MCE and the government have done a lot of for his community and stated that they deserve commendation and not condemnation.

He said through the lobbying skills of the MCE, the Nsein township roads are being asphalted.

He stated: "currently the Nsein Senior High School's roads are being tarred and the MCE cannot be hailed for that".

He also lauded the MCE for lobbying through the TULLOW oil company to construct a 500-capacity bed dormitory for the Nsein Senior High School to resolve the accommodation challenges facing the school.

Mr. James Kainyah emphasized that the MCE has education of his people at heart and this regard, he said recently the MCE supplied school uniforms to the students of Awulae Agyefi Kwame II Junior High School at Nsein.

"Just last two weeks I was the MCE where he donated dual desks to the Awulae Agyefi Kwame II JHS and also supplied the students with school uniforms so I don't understand why some people are saying has not done anything at Nsein here, I don't actually understand why", he bemoaned.

On job opportunities, the Deputy Secretary said through the MCE, some youth of Nsein had been employed at Ghana Gas Company in Ellembelle District.

He revealed that: "In 2018, the Assembly under the able leadership of Hon. Frank Okpenyen was deeply involved in the organization of Nsein kundum celebration. The MCE Hon.Frank Okpenyen was present and fully participated in the launching of the 50th anniversary of his reign and Nsein Kundum .It was through this that the MCE and the MP in collaboration with the chiefs invited his Excellency the vice president, Dr. Bawumia for the 50th kundum celebration.

Also in 2019, the MCE in collaboration with the Assembly and Nsein traditional council celebrated the 62nd independence anniversary (6th March) at Nsein. This was the first time something of that nature happened in Evalue Ajomoro Gwira".

He added that: "The road from Avrebo Junction through Avrebo, Ahunyame to Adelekeso which falls under Nsein Traditional council is under construction. The Assembly under the leadership of Hon. Frank Okpenyen has constructed a new road from Nsein town to the light industrial area. This has reduced the traveling distance from Nsein to the business center".

According to him, the entire Evalue-Ajomoro Gwira Executives are solidly behind the MCE and he is therefore appealing to President Akufo-Addo to retain Frank Okpenyen as Nzema East MCE for another for four years.