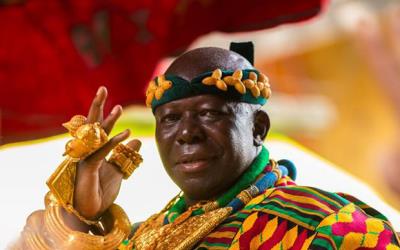 West Africa's last monarch and ruler of the Asante Kingdom in Ghana, His Royal Majesty - Otumfuo Osei Tutu II, has boastfully indicated the governing New Patriotic Party (NPP), opposition National Democratic Congress (NDC) and all other political parties in the country belong to him.

According to him, the throne he occupies puts him miles above partisan politics indicating he would continue to contribute his quota to the peace, unity and growth of the country.

Addressing a durbar during an Akwasidae festival in the United States of America (US) on Wednesday, he said he doesn’t have special preference for any political party in the country, adding that his only interest is to see Ghana become prosperous.

He also promised to continue to act as a father figure for the state as he had done during his two-decade reign on the Golden Stool. He pledged to continue to settle political disputes and protect Ghana’s peace.

“The New Patriotic Party (NPP), the National Democratic Congress (NDC), the Convention People’s Party (CPP) and all the other political parties in Ghana belong to me and that is an undeniable fact that you are all aware of,” said Otumfuo.

“I have my grandchildren virtually in all the political parties in the country, including the NPP and the NDC and so they are all my people,” Nana added.

According to him, it is the duty of traditional leaders to use wisdom and dialogue to resolve any misunderstanding and tension between political parties to ensure peace. The Asantehene stated that nothing would compel him to relinquish his special role as a peacemaker for Ghana.