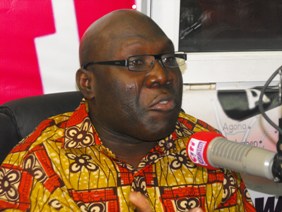 The opposition New Patriotic Party (NPP) is now a movement whose actions revolve around Nana Akufo-Addo and has no tolerance for dissenting views or criticism, Minister of Roads and Highways Inusah Fuseini has stated.

“NPP is actually a movement now, not a political party. It is Nana Akufo-Addo Movement where anyone who disagrees with him risks being sacked from the party,” he noted on Citi FM’s The Big Issue on Saturday September 10, 2016.

He stressed that this was evident in the way the party dealt with members who said anything contrary to the flag bearer’s position. He dared private legal practitioner and NPP sympathiser John Kumah, who was also on the show, to criticise Nana Akufo-Addo if he disagreed.

“I dare you to criticise Nana Addo and let’s see what happens. …Nobody was dismissed from the National Democratic Congress (NDC) [for criticising John Mahama],” he maintained.

But Mr Kumah, reacting, indicated that the governing NDC sacked a long-serving member when that individual wanted to contest Mr Mahama for the flag bearer slot ahead of this year’s elections.

He also raised the issue of the suspension of current National Organiser Kofi Adams in 2012 after a voice that appeared to be his, was heard on a leaked tape saying he would do everything possible to prevent then-President Mills from securing the mandate of Ghanaians for a second term.

The two men were airing their views on comments by President John Mahama that Nana Akufo-Addo was a divisive leader who should learn to accept criticism.

Mr Mahama made the statement when he appeared on Metro TV’s Good Evening Ghana programme on Tuesday September 6.