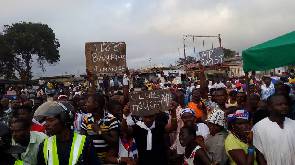 One of the election flashpoints in Accra, the Odododiodio Constituency, erupted in violence Friday evening when supporters of rivalry National Democratic Congress and the New Patriotic Party clashed.

A supporter of the NDC, who is a lady, was stabbed in the melee, while several others from both parties sustained various degrees of injury.

The windscreen of at least two cars was also smashed. No arrest have been made. The supporters had gathered at the Bukom Square to cheer on their respective candidates who were taking part in a parliamentary debate by the Accra-based radio station, 3FM 92.7, when tempers flared.

Candidate for the NDC, incumbent Nii Lante Vanderpuije and NPP’s Nii Lante Bannerman were ushered to the event grounds by hundreds of party faithfuls who chanted songs.

The event kicked off peacefully with the five aspirants contesting the elections in the constituency discussed the germane issues on their agenda and that of their party to justify why each is best choice to represent the constituency in parliament.

They are Evangelist William Larbie of the Progressive People’s Party, Issaku Sampson of the Convention People’s Party and Jonathan Heward-Mills of the All People’s Congress as well as Mr Bannerman and Mr Vanderpuije.

Prior to their arrival, their representatives were given the platform to sell their candidates jabbed each other and accused the incumbent MP as being responsible for what is happening constituency.

Supporters of NPP’s Bannerman arrived at the grounds with placards bearing inscriptions that attacked NDC’s Vanderpuije; something that incensed the supporters of the NDC.

Some of the placards, which were raised high, read: “MP Liar”, “MP rapist”. At the height of the debate, an NDC supporter moved out of the charged crowd to drop one GHC1 notes on Mr Vanderpuije.

The NPP responded in similar manner with GHC10 notes. The situation heightened the long-standing tension between the supporters of the two rivalry parties, causing each side to cast aspersions and insults on the other while the debate progressed.

Anytime NDC’s Vanderjuije took the microphone to speak, the NPP supporters will raise their voice amidst the shouts of away, away, away.

This and the inscriptions on the placards angered Mr Vanderpuije who controlled his temper. But just about six minutes to the end of the debate, which was broadcasted live on 3FM, an apparent angry NDC supporter moved out of the crowd to the dais and punched one of the representatives of Mr Bannerman. Then the situation degenerated.

The supporters from each side started hurling stones and sticks at each other, and while the Police tried to intervene to ensure order, they clashed.

The Police pushed back the crowd far from the podium, cordoned the area and whisked the candidates away into their vehicle to secure their safety. They then called for reinforcement. Although the Police were armed, they did not fire warning shots or teargas to disperse the crowd as that could have resulted in a bloody situation.

Leaders in the predominant Ga community quickly intervened. The debate, which formed part of Media General’s election platform, the Election Command Centre was hosted by Johnie Hughes and Alfred Ocansey.