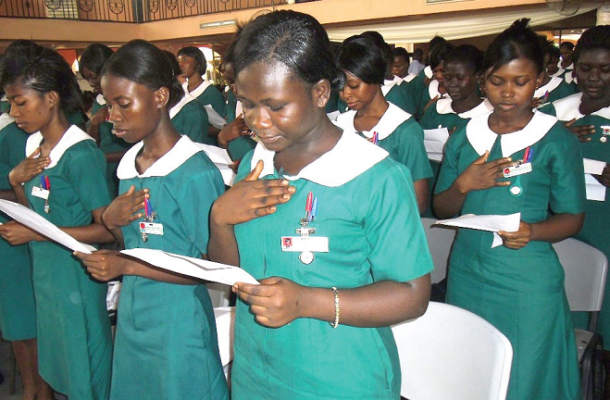 The Ghana Registered Nurses and Midwives Association (GRNMA) has temporarily called off its strike which started on Monday, September 20.

Addressing a section of the media, the president of GRNMA, Perpetual Ofori Ampofo, disclosed that there has been a court injunction and that is why they have suspended the action effective tomorrow.

She added that the Association has temporarily lifted the strike action for the love of Ghana and the respect for the rule of law.

However, the Association is yet to meet the National Labour Commission to fix a date for their negotiation for better working conditions.

“We put down our tools because the employer’s stands on our grievances were not helpful. Yesterday around 4:30, the injunction was formally brought to our office. Therefore, the strike we started on Monday has been suspended for now,” she said.

That said, the Association warned if the negotiation fails, the strike will be activated again.

Madam Ampofo explained that the strike is to fight for uniform allowance, rent and transport allowance as well as professional development allowance for the workers.

Again, the Association is asking for a rural incentive allowance for workers in deprived communities and an on-call allowance for nurses who work across the clock (24/7).