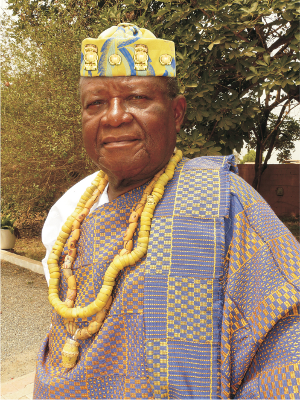 It is however immediately not known the exact age he had but the Nyaho Tamakloe Family of Whuti was on Tuesday 30th January, 2018 at the office of the former President, John Dramani Mahama to officially announce the death of the former chief.

Mr. Mahama has however expressed his condolences to the bereaved family of the former Air-force Commander.

"...I received a delegation from the Nyaho Tamakloe Family of Whuti to announce the death of Togbui Nyaho Tamakloe V, Dufia of Whuti and Mafiaga of Anlo. May his soul rest in peace", he wrote on Facebook.

Born Albert Kwao Tamakloe several years ago at Anloga, in the Volta Region. He was the seventh out of the eleven male children of his father, the late Mr. Rudolph Mawuli Kobla Tamakloe.

Following the death of his uncle Togbi Nyaho Tamakloe IV, he was nominated by the Kuetuade lineage of the Tamakloe family to succeed him.

He was married with five children, (three boys and two girls) who are all on their own.

His hobbies included watching films on TV, especially those on football, athletics, boxing, as well as Ghanaian and Nigerian films which were acted in Ewe and English, as he could not speak any other language than the two.

He also liked to drive himself around because he felt uncomfortable being driven by someone else, perhaps due to his exposure to flying as a pilot and lack of confidence in any other driver.

Togbi Nyaho Tamakloe V before his death did not only perform his role as a chief to his people, but also saw to  the socio-economic growth and vibrancy of Whuti township, the Anlo state, and the Volta Region as a whole.