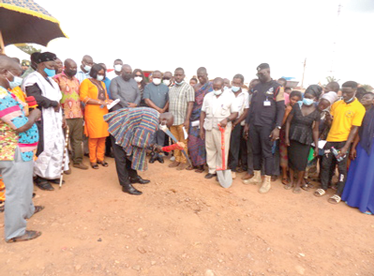 Construction works have started on two World Bank-sponsored projects worth GH¢5.53 million at the Akyem Oda Old Premier Market in the Eastern Region.

The projects are 68 lockable market stores and ancillary facilities which come with precast blocks paving 3,000 square metres of the market and a 600-millimetre diameter “U” drain spanning 240 metres.

They are being undertaken under the Ghana Secondary Cities Support Programme.

At the sod-cutting ceremony last Tuesday, the Eastern Regional Minister, Mr Seth Kwame Acheampong, advised the two contractors executing the projects — the New Era Discovery Company Limited and the Almuscom Company Limited — not  to only complete them on schedule but to also do quality work.

He said the people of Oda should count themselves lucky to be one of the only four municipalities in the Eastern Region and one of 25 communities to benefit from the projects nationwide.

Mr Acheampong stressed that the completion of the two major projects would give Oda a facelift, boost economic activities and reduce unemployment in the municipality.

He advised the traders not to undermine the construction firms but to offer them the needed support and cooperation to speed up the progress of the projects.

The regional minister urged the project consultants to offer proper supervisory work to compel the contractors to execute the work according to contract specification.

The Member of Parliament (MP) for Oda, Mr Alexander Akwasi Acquah, expressed gratitude to the government for providing the municipality with its fair share of development projects.

He advised the people to honour their tax obligations at all times in order to benefit from more of such projects.

The Chief Executive of the Birim Central Municipality, Ms Victoria Adu, said the projects and another one at Nkwantanum would ease congestion at the Oda Central Market and the main lorry park.

She also called for support from the people to ensure the successful completion of the projects.

He, however, expressed concern about the activities of some contractors who had abandoned work on some of the road projects at Oda.

Obrempong Kyereh, therefore, urged the government to pay them their contract sums for them to complete the projects.