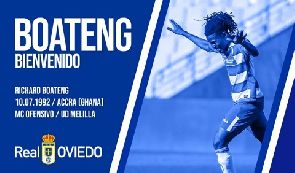 Ghanaian midfielder Richard Boateng has completed a switch to Spanish second-tier side Real Oviedo on a two-year deal.

Real Oviedo has reached an agreement to recruit Richard Boateng, an offensive midfielder, for the next two seasons.

Boateng is a 25-year-old who was born on July 10, 1992, in Accra, Ghana. Trained in Granada’s Youth Academy, the midfielder has played with San Roque, Extremadura, and UD Melilla, from which club he is coming. During the season, he has played 31 matches, accumulating 2,458 minutes of playing time.

Richard Boateng is an offensive midfielder of 1.72 meters, who is known for his physicality, attack, and his good control of the ball. In his last season with Melilla, the Ghanian scored a total of 14 goals, one of them being the best goal of the season in the bronze category of Spanish football.

After having submitted to a medical examination at Clínica Asturias, the midfielder will begin the preseason on July 9th. There, he’ll meet his new teammates and will work under Juan Antonio Anquela’s orders to be completely available to the coach once the season starts.