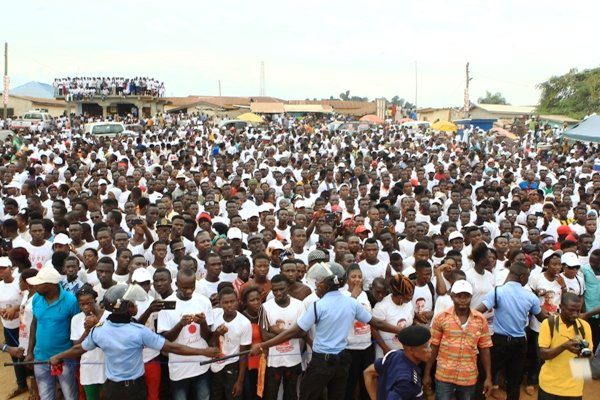 The Progressive Peoples Party (PPP) has pulled one of the biggest crowds since political campaigning began at Ofoase-Ayirebi, a constituency previously dominated by the New Patriotic Party (NPP).

It was as if the party was holding another National Convention at a different location.

Party supporters from nearby villages thronged the Ayirebi town to throw their support for the aspiring Progressive People’s Party (PPP) Parliamentary candidate, John Obiri Yeboah, who was officially launching his campaign.

The entire Ayirebi township was submerged in the red and white colours of the PPP. For close to four (4) hours that the rally lasted, there was virtual halt of vehicular movement.

Human traffic was so intense that one by-stander could not help but to exclaim “is that the PPP?” Officially endorsing John Obiri Yeboah as the PPP Parliamentary Candidate for the Ofoase-Ayirebi constituency, the flagbearer of the Progressive People’s Party (PPP), Dr Papa Kwesi Nduom, charged the people to the one they know.

“It is during elections that people travel back to get to know their hometowns and where they come from. During this election, vote for someone you know, someone who has helped you before.

Vote for someone who knows your problems and your wants, not someone who only identifies his hometown and comes back home during elections. Vote for a true indigene of the land, that is why I am here to unveil an indigene of this town to you. He is in the person of John Obiri Yeboah.” He also urged the electorate not to yield to the misconception that a vote for the PPP would be a wasted one. 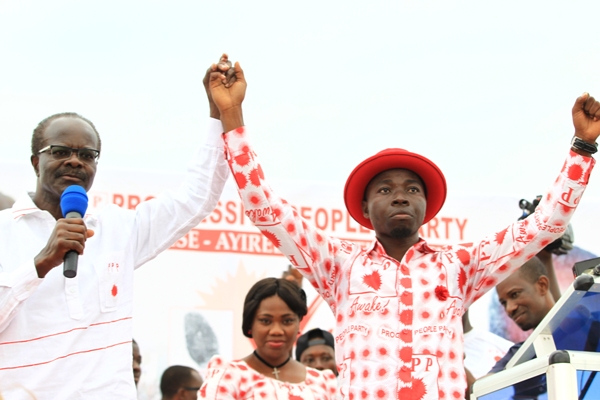 Explaining his decision to contest as MP for the constituency to the people, he said "the solution to all the problems in this constituency is that we need to elect someone who has  lived the problems of the Ofoase-Ayirebi people. As I stand before you I fetched firewood with you, I laboured on your farms for livelihood, so if you need someone to come solve your problems, there is none qualified than myself,” he boldly proclaimed.

He recalled how the NPP and its leadership within the constituency twisted his arms and stole victory from him leading to him finally finding peace within the PPP.

"We were born and bred here, we lived with you, so we shouldn't allow someone we don’t know [to] come and determine our future for us, we must seize the opportunity to help elect John Obiri Yeboah and Dr Papa Kwesi Nduom to effectively change your lives as we are already doing even without your mandate to lead".

Four Factories for Ofoase-Ayirebi Whiles others are now pledging to build a factory in every district, John Obiri Yeboah pledged to facilitate the provision of massive employment for the youth when elected by the people to become their MP.

He charged the people to vote massively for Dr. Papa Kwesi Nduom and himself since they are the two people who have the proven track record of creating jobs for them