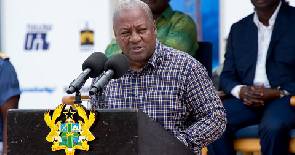 The oil and gas sector has so far provided 7,000 jobs in Ghana, President John Dramani Mahama has stated.

He said compliance with the local content policy regulations of the country had resulted in local companies getting $1 billion worth of contracts.

Tullow Oil Ghana Limited, the lead producer of the TEN oilfield, has achieved a remarkable record of providing more opportunities for the local industry compared to other offshore projects in the past.

President Mahama was speaking at a durbar to commemorate the production of oil at the Tweneboa Enyera Ntomme (TEN) fields in Takoradi yesterday.

Describing the commencement of production of oil on the TEN fields as a significant development in the country’s oil and gas sector, he congratulated Tullow Oil Ghana Limited and its partners for bringing the project on stream.

President Mahama commended the Petroleum Commission for working tirelessly with other partners to produce the Local Content bill, which was now law.

He also congratulated the partners for their teamwork, which had led to the production of oil on the TEN fields.

President Mahama said the project had encountered challenges such as the maritime border dispute between Ghana and Cote d’Ivoire, which stopped the drilling of new wells until the final determination of the dispute, as well as the global downturn in crude oil prices.

Those challenges, he noted, did not impede the progress of work, which had resulted in the project being on time and on budget.

He said Ghana and the partners were looking forward to a peaceful resolution of the dispute at the Internal Tribunal for the Law of the Sea (ITLOS).

The President expressed the hope that lessons learnt from the Jubilee oilfields would be put into practice on the TEN project.

He said the expected gas from the project would come on stream in 2017 and would be transmitted to the Atuabo Gas Processing plant for power generation and production of additional Liquefied Petroleum Gas (LPG).

President Mahama said the additional gas expected from the $7 billion ENI gas project in 2018 was a clear signal of the country moving several steps forward in dealing with energy security.

The Minister of Petroleum, Mr Emmanuel Armah Kofi Buah, said the commencement of oil production from the TEN fields, underlined the country's credibility as the preferred destination for investment in West Africa.

The minister, who devoted the biggest chunk of his address to the participation of indigenous Ghanaian businesses in major infrastructural projects in the oil and gas sector, said major components of the FPSO Professor John Evans Atta Mills such as the fabrication of modules stools and suction piles, fabrication of mudmats and gas export manifold, among others, were done by indigenous Ghanaian companies.

"Important construction and fabrication works were completed in Ghana by local sub-contractors such as Harlequin, Orsam and Seaweld. In addition, over 520 Ghanaians were employed during the development phase by Tullow and its foreign and local subcontractors. Many more technicians and engineers from the Petroleum Commission and GNPC were also attached to the project team for capacity building," he said to applause from the gathering.

Generally, he said, a sizable portion of the over $4 billion spent on the project was spent in the country with the money going to local contractors.