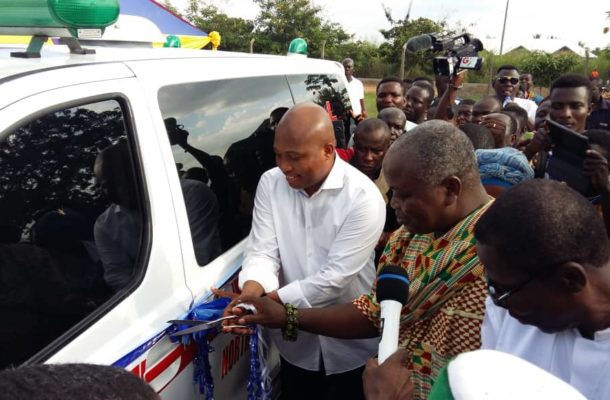 The state of readiness of the Juapong Health Centre to respond to emergency situations was given a boost following the donation of an ambulance to the facility by the Member of Parliament (MP) for North Tongu, Mr Samuel Okudzeto Ablakwa.

Aside from the donation of an ambulance, the MP presented three wheelchairs and assorted medical consumables to the health centre.

At a handover ceremony that took place at the Juapong Health Centre last Saturday, Mr Ablakwa said the donation was made to commemorate his 38th birthday, expressing the hope that the donation of the vehicle and commodities would go a long way to enable the centre to respond to emergencies more readily.

He said besides making the donation in commemoration of his birthday, he was also motivated to come up with the offer considering the precarious nature of the country’s emergency response system with few functioning ambulances serving the entire population.

“We are told there are only 54 ambulances serving all the 275 constituencies in the country. I resolved, therefore, that on my birthday, I would donate an ambulance to help save lives. I expect that transfer of emergency cases to bigger health facilities outside the district will be made a lot more easy to help curb needless deaths,” he stated.

According to the North Tongu legislator, the ambulance would serve the Volo, Dorfor, Torgorme and Fodzoku communities.

He said arrangements were also being made to procure an additional ambulance to serve the Battor and Mepe areas in the constituency.

He indicated that he had also previously donated an incubator, theatre beds and other medical equipment to the Battor Catholic Hospital.

He also disclosed that as part of his agenda to promote health in the constituency, a resident medical officer had been engaged for the Tagadzi Health Centre.

The medical officer, he said, had been given the necessary resources he would need to make his work easy.

A medical officer with the St Anne’s Polyclinic, Dr Momodou Cham, who goes round health facilities in the area that are short of a health physician, said the ambulance had come at an appropriate time and would help prevent needless deaths, especially among pregnant women.

The Chief of the Dorfor Traditional Area, Togbe Ananse Titriku XII, commended the MP for his several interventions in health and other sectors geared towards enhancing the well-being of the people.

He, thus, called for the ambulance to be used properly and warned against its use as a hearse.