Oldest sitting president in the world dies at 92 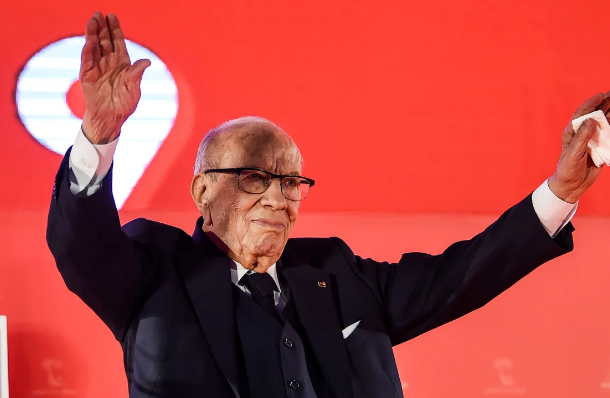 Mohammed Beji Caid Essebsi, the oldest sitting president in the world has died at age 92.

The Tunisian president, a formidable figure in the country’s politics whose career bridged the country’s transition from colonial ward to dictatorship to fledgeling democracy, died on Thursday, according to state media.

"Tunisia is losing one of its senior leaders who had taken part in all its major battles in contemporary history,” said a statement issued by his Nidaa Tounes party. “The wars for liberation from colonialism, building an independent state and establishing a democratic order.”

Tunisia public broadcaster changed its logo to black and played Koranic citations, and the government announced seven days of mourning in the north African state of 10 million.

A French-educated lawyer and longtime political figure, Essebsi passed away after being admitted to the Tunis Military Hospital, said the Tunisian Press Agency, citing a press release by the presidency. He has been ailing for months, and many Tunisians expected his passing. He recently announced that he would not run in the election scheduled for November, saying a younger person should lead the country.
Mohamed Ennaceur, the president of parliament is set to take over as interim head of state. Under the country’s constitution, the president of the parliament will assume the presidency for 45 to 90 days while elections are organised.

Essebsi’s passing will likely prompt for influence within Nidaa Tunis between his son, Hafedh, a leader of the party, and Prime Minister Youssef Chahed, who leads a breakaway faction.

Tunisia has charted a unique democratic course since the self-immolation of a frustrated fruit vendor ignited a revolution in Tunisia and inspired the 2011 Arab Spring uprisings. It became the sole Middle East or North African country to topple its longtime dictator and move peacefully towards pluralism.

Essebsi served as Tunisia’s transitional leader after the 2011 popular uprising that drove out long-time ruler Zine el Abedine Ben Ali,  and then was elected president in 2014 elections.

A standard-bearer for the country’s secular coastal elite, he has been nonetheless credited by diplomats and scholars for forging a detente with his chief adversary and rival, the Islamist Ennahdha Party, which was outlawed and severely repressed under Mr Ben Ali but has been a major political force since 2011.

Rachid Ghannouchi, president of Ennahdha, issued a statement Thursday describing the man with whom he had a complicated relationship as “a true patriot and a pillar of Tunisia’s democratic transition,” and calling for an orderly succession.

“He made history as the first elected president of Tunisia’s Second Republic,” said Mr Ghannouchi. “He would have wanted all Tunisians to uphold the Constitution and rule of law and to maintain our democratic path, no matter what challenges we face.”

Born in the picturesque and lively town Sidi Bousaid, a seaside suburb of Tunis, Essebsi studied law in Paris and became a disciple Habib Bourguiba, Tunisia’s first ruler after emerging from French rule, serving stints as minister of interior, minister of defence, and envoy to France and West Germany and other posts.

Mr Bourguiba is still celebrated as a giant of Tunisian history, a visionary who invested the country’s resources in education and infrastructure. But his successor, Mr Ben Ali, while initially promising reform, is widely regarded as brutal and corrupt enforcer who tortured political prisoners and oversaw a police state.

Essebsi served as lawmaker and briefly as president of parliament early in Mr Ben Ali’s rule, but left government to practice law in the early 1990s, avoiding the stain of being associated with the regime’s worst excesses.

In the tumultuous weeks after Mr Ben Ali’s downfall and banishment to Saudi Arabia, Essebsi emerged as interim prime minister, leaving the post late in the year after Ennahdha won the country’s first parliamentary vote and forming his own party.

He won the presidency in 2014 with 56 percent of the vote, garnering the support of Tunisians suspicious of Ennahdha’s agenda and disappointed by its handling of the economy.

But spurning pressure by Arabian Peninsula hereditary dictatorships to crack down on Ennahdha as Egypt’s ruler Abdel-Fattah el-Sisi did against the Muslim Brotherhood, Essebsi instead warily partnered with Ennahdha in attempting to stabilise the country, fight outbreaks of terrorism, and improve a struggling economy.