OPINION: Kwadwo Asamoah- The Most Underrated Yet Most Important Signing 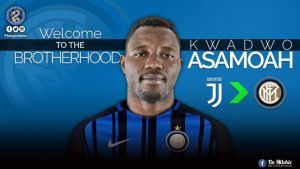 Indeed, it is a rare occasion in calcio, that we see players swap jerseys for their rival clubs. Kwadwo Asamoah will be 29th player to play for both Inter and their fiercest rival Juventus.

One of the most decorated African players of all time, Asamoah enjoyed a remarkable six year spell with the Bianconeri, winning scudetto in each of the seasons. Asamoah has represented Ghana in two FIFA World Cups and was a member of the team that won Bronze and Silver in the 2008 and 2010 African Cup of Nations respectively. Renowned for his versatility, Asamoah is also a strong, dynamic, fast, hardworking and tenacious player that can be deployed as a defender or midfielder.

Strengths:
Asamoah is versatile and could fill in any role on the left side; as a left wing back, left back or even left midfielder. He can also competently play as a central midfielder, attacking midfielder or a second striker if needs be. A player blessed with tactical intelligence, stamina, agility, speed, vision and immense dribbling ability. Most of the time, Asamoah capitalises on his physical attributes to dispose of his opponents.

Weakness:
Since he isn’t naturally a defensive player, Asamoah finds it difficult to defend against extremely dexterous wingers. His constant pressing high up in the field tends to expose his wing on counter. Also his relentless injury problems have perhaps classified him among the injury prone players.

How He Fits In Spalletti’s Tactics:

Due to his versatility, Asamoah will provide Spalletti with numerous options; both offensively and defensively. However, it is likely that he will be deployed as left back or left wing back.

In a classic 4-2-3-1 formation, Asamoah could slot in as a left back. Making forward runs, combining with the left winger to create chances for the strikers. While In a 3-5-2/3-4-2-1 set up, he can either play as a left wingback or central midfielder.

Being an offensive fullback/wing back, we should expect a lot of attacking movements down the flank. Asamoah is an energetic player with an assiduous work rate. He is expected to be the solution to Inter’s left back woes. Already accustomed to the league, Asamoah is exactly what Inter needs; experience, mentally strong, a champion and a gifted player currently in his prime.