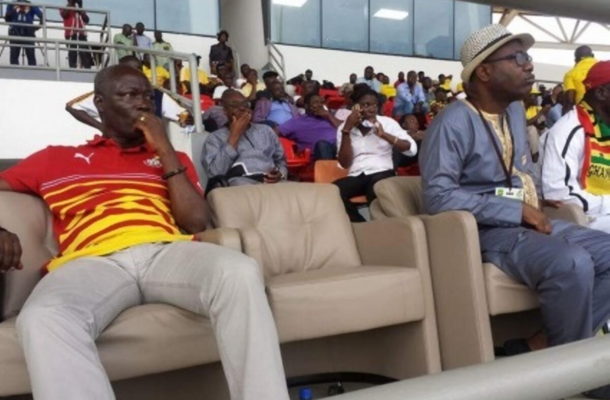 It seems the feud between the Sports Ministry and the Ghana Football Association is getting out of hand as the leaders of the various institutions keep on spewing venom at each other in the media.

But the most surprising observation I have made so far from this unending quarrel is why Ghanaian professional sports journalists have taken a keen interest in knocking the heads of these major institutions together and sit back behind the microphone to apportion blames, forgetting they are the same people fueling the fire.Is the media not fed up with running to the same persons representing the feuding parties to respond to one accusation after another? This issue of Nii Lantey Vanderpuije has said this about Nyantakyi hence the latter should react to the comment and vice versa is becoming stale in the ears. I am forced to believe that the system is “dry” in terms of news due to the off-season hence sports producers and presenters have resorted to fanning the squabble to get something to feed on. Do we then say that the Ghana sports media lack creativity?Since the inception of the GFA-Sports ministry dispute, several Sports Journalists have made the issue a running order of their various sports programme. You tune into any radio station in the morning trying to catch up with updates on happenings in Ghana sports and the only thing you will hear is the Sports minister ranting with some lazy one’s going further to dramatize the situation.


I wonder what the sports media seek to achieve by knocking the heads of the FA and Sports Ministry bosses against each other. The last time I checked, the media is tasked to be the watchdog of the society and being a watch dog is keeping the leaders of the society on track when going wayward. But this responsibility is misplaced in the Sports media fraternity.The media now help to brew feud between administrators. The sad part of this whole issue is how this unending conflict is gradually creeping into the Black Stars team hence affecting the performance the country’s number 1 sports. As the saying goes “if two elephants fight, it’s the ground that suffers” and indeed the ground (Ghana Sports) is suffering thanks to the so called Sports Journalists who have taken up the issue like malaria pills feeding the public with a dose each day.My worse fear as a sports journalist is the outcome of this feud which no one knows when it’s going to end. I foresee the Black Stars qualification to the 2018 World Cup being affected by this unruly dispute between the two major Sports managers. And I believe that Ghanaian Sports Journalists will get institutions and individuals to crown with the blame cap should the Black Stars miss out on the Mundial, forgetting they are the major cause.It’s undoubtable that Ghana is a country that is unserious about sports development, but being unable to develop sports in Ghana does not mean we should destroy it. I won’t blame government, neither will I blame the Sports Ministry nor the Ghana Football Association for the retrogression of sports in Ghana because I believe the story would have been better if our Sports media showed some decorum in their reportage.It’s about time we leave the issue between the Ghana football association and Sports ministry to rest, there are so many untapped sports stories that can equally give positive ratings.