How Opoku Nti used Kotoko’s “MTN credit” for his agenda 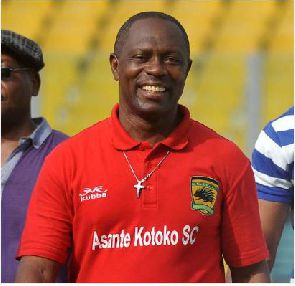 The Former Asante Kotoko footballer confessed in a live radio interview how the he was approached by the General manager of Kotoko to use his influence in bringing a presupposed enemy Coach David Duncan to the club.

Sarfo revealed, the general manager (Opoku Nti) met him with recharge cards of the club’s headline sponsor MTN and pleaded to him to campaign for Duncan to be signed by the Kumasi based club.

The Black president as he’s affectionately known however added he never took money from the general manager for that role but added Duncan was a coach he already liked and wanted to join Kotoko.

“The only thing Opoku Nti has given me is MTN credit, and he said Sarfo please the supporters listen to you a lot and you command a huge respect so please campaign for us to bring Duncan to Kotoko” He said on Kumasi based Kessben FM.