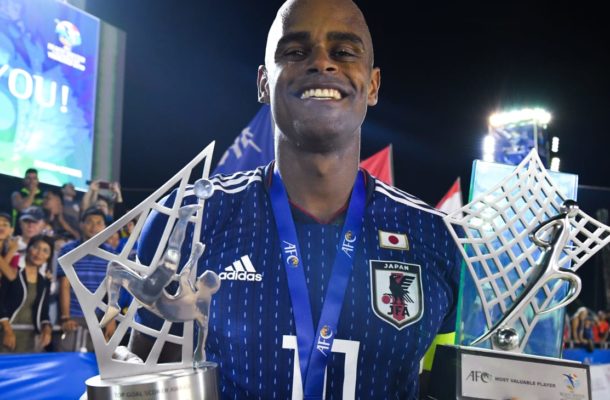 
Ozu was voted the tournament's Most Valuable Player, while his nine goal-haul in Japan's six matches also saw the towering star claim the Top Goal Scorer Award, one ahead of teammate Shusei Yamauchi.

The dual awards are the latest in a long line of accolades for the Brazilian-born Ozu, who has been voted one of the world's 'Top Five' at the Beach Soccer Stars Awards for four of the last five calendar years.

He was also voted best player in the 2013 and 2015 editions of the Asian Beach Soccer Championship, which were staged before the tournament came under the AFC's umbrella.


While Ozu had made his presence felt at the past three editions of the tournament - and was part of Japan's coaching staff in their successful 2011 campaign - this is the first time he has won an Asian title as a player, and the star said he was relieved to have climbed the mountain.

"I was waiting for this a long time, and I waited three times," he said.

"I worked hard for this with the players and the coaches and staff, so this time, it was our time, and I'm happy we did it.

"I just want to say thank you to the players, the coach and the fans who came to cheer us, as well as the fans in Japan."

Ozu played a major role in Japan's success, scoring in five of their six matches, while also providing four assists as Ruy Ramos' side confirmed their status as Asia's beach soccer kings.

The 33-year-old - who said Islamic Republic of Iran and UAE were his most difficult opponents - reflected on his side's campaign.

"Before we came here we had a tough training camp," he explained. "We were running a lot, and we were prepared for a difficult tournament

"Every team we played against gave us a difficult game, and I think we started growing in every match. It was step by step, and by the end we were able to win."