Over five communities at Kumbungu protest over bad roads 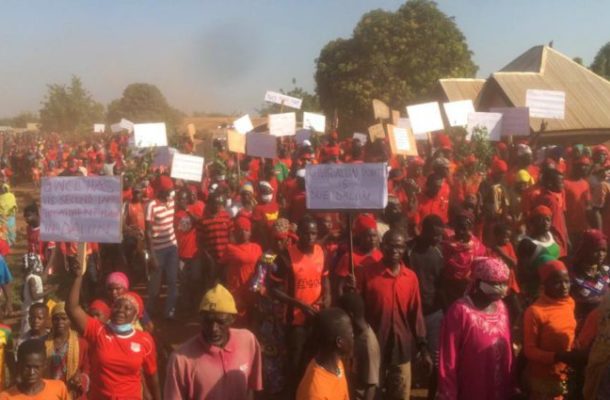 Over five communities in the Kumbungu District of the Northern Region, including Dalun and Nawuni Monday, demonstrated against the government over the abandoned Kumbungu – Dalun road.

The road is one of the deplorable roads within the Northern Region making it impassable for vehicular and motorbike users anytime it rains.

Some of the demonstrators, speaking to Adom News, said they would be compelled to stop the Ghana Water Company Limited from operating from the Dalun and Nawuni communities if the government fails to listen to them since the main water plant is in their communities.


They added that young ladies in the communities have now turned old ladies and pregnant women are always suffering due to the bad nature of the road, hence the need for the government to come to their aid.

“Young ladies in our communities have turned old ladies and pregnant women are losing their babies due to the deplorable nature of the road,” they revealed.


checks in the area revealed that several women have lost their pregnancies and a young boy had his right leg amputated due to the ‘killer’ road.

The brother of Adom News‘the primary six pupil, Alhassan Uberu, speaking to Adom News, said his junior brother’s incident occurred when a tipper truck dodged potholes and unfortunately hit him leading to the loss of his leg.


The Dalun Youth Association Chairman, Mahama Safianu, presenting their petition to the Deputy Coordinating Director of the Kumbungu District, said the Dalun and Nawuni communities are the largest contributors of the Internally Generated Funds in the district but there is no development in the area.
According to him, the contractor, who was working on the road, abandoned the site immediately after the 2020 elections.

He has, therefore, called on the government to force the contractor to the site to avoid any negative action of the youth of the communities.

The Deputy Coordinating Director, Mohammed Kamal Baba, who received the petition on behalf of the District Chief Executive, said the road is one of the assembly’s major problems and they will make sure the petition reaches the appropriate office.