Ozu Moreira: Asian game has more depth than ever 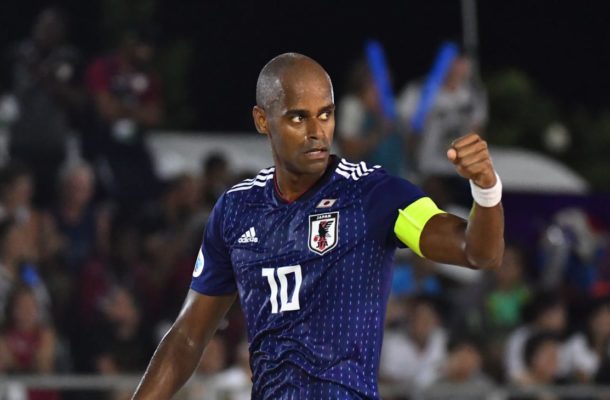 Pattaya: Japan captain Ozu Moreira believes Asian beach soccer is becoming more competitive every year, and dreams of a day where the Continent's best players can test themselves in each other's national leagues.


The Brazilian-born star has established himself as one of the standout players in Asia and beyond with a long list of achievements at both club and national team level.

Arriving in Japan in 2007, and naturalised five years later, Ozu has been an indispensable part of a national team which has been among the best in Asia, and was voted as one of the world's top five players in 2014.

Japan have featured at the last nine FIFA Beach Soccer World Cups, and they are among the favourites to take one of three spots currently on offer to the 15 participating teams at the AFC Beach Soccer Championship in Thailand.

But, with Islamic Republic of Iran rising to second in the world rankings, and a number of unheralded nations emerging, 33-year-old Ozu believes the Asian scene is becoming more and more challenging.

"This year there are many teams that have the chance to go (to the World Cup)," he told the-AFC.com.

"You have Bahrain, Iran, Iraq and Oman, (United Arab Emirates), and even Thailand, yesterday (against Palestine) they didn't play well, but they are improving.

"Five or six years ago there was just three of four teams (who could compete), now they are so many strong teams. It's good.

"We (in Asia) have to improve more, so this should be a really good tournament."

To simply call Ozu a beach soccer talent would be a vast understatement. The towering Rio native has a superb résumé littered with significant achievements on the sand, particularly at major tournaments.

He netted seven goals in the 2017 AFC Beach Soccer Championship, was twice voted MVP in Japan's journeys to the 2013 and 2015 World Cups, the first of which saw him awarded the Silver Ball as the second best player in the global finals.

In addition to his international accolades, Ozu has also shone out for a number major clubs, including the likes of FC Barcelona, Israel's Falfala Kfar Qassem, and Russia's Lokomotiv Moscow, with whom he won the prestigious Mundialito de Clubes in 2017.

Currently a member of reigning Japanese champions Tokyo Verdy, Ozu spoke on the importance of the club game in beach soccer, and revealed his ambition to see Asian players sharing the limelight in each other's major club competitions.

"A big problem here in Asia is not too many countries have a league like in Europe and South America," he explained.

"I think only in Iran and Japan, and in the UAE they have a league too. But I'm happy because I see some national teams, like today I saw Iraq (who lost 5-2 to Iran), and they are improving.

"I hope that these countries can start to make their own leagues and that players from Japan can go to other countries, or Iranians can come to play in Japan, and we can mix (with each other) like in Europe, where they also bring many Brazilian players.

"I think that will make the level go up and we will have more chance to see an Asian country become a champion in the World Cup. I hope in the coming years we can move up."

In the meantime, Ozu is focused on leading Japan to a tenth World Cup in a row, and a fourth personal journey to the beach soccer summit, later this year in Paraguay.

Coached by ultra-experienced Ruy Ramos - another Brazilian native who became a momentous figure in the Japanese game - the East Asians got off to a strong start with a typically impressive win over Kuwait on Friday.

Ozu scored two scorching long range goals in the 8-1 master class, but he insists his side are a long way away from where they want to be, ahead of the cutthroat matches to come.

"From the beginning we had a good start, and we could score when we had the chance, but in total, looking at all of the performance it was not good for us," he said.

"For some players it's their first time in the competition and they feel the pressure, but we did score and had a first victory in the match and that was good.

"We need to practice and fix what we did wrong to make the next step better."

Japan's next match at the AFC Beach Soccer Championship is against Qatar on Sunday, with the tournament final to held on March 17.