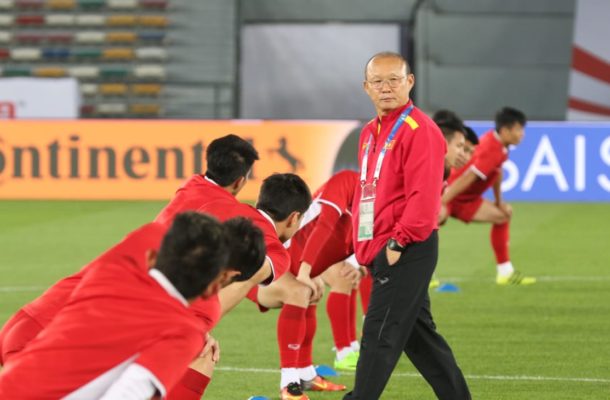 Incheon: Head coach Park Hang-seo is determined to lead Vietnam to more glory and history after a year of highs for the Southeast Asian nation.


After an amazing 2018 and a brilliant start to 2019, Korea Republic's Park has already identified his next target - qualifying for the 2020 AFC U23 Championship Thailand and the 2020 Tokyo Olympics.

Park kicked off his Vietnamese adventure by guiding the Young Golden Dragons to a runners-up finish in the 2018 AFC U23 Championship and followed that up by a semi-final appearance in the 2018 Asian Games Indonesia.

The senior side then brushed aside all challengers to lift the 2018 AFF Cup and continued their run by qualifying for the AFC Asian Cup UAE 2019 quarter-finals and Vietnam fans are, understandably, expecting more highs.


It starts, coincidentially, with the AFC U23 Championship again and Park, 60, said he is looking forward to the challenge of taking Vietnam into the Finals.

"To prepare for the qualification tournament that starts on March 22, we'll start training from March 6," Park said. "There are no easy opponents. We first have to qualify for the AFC U23 championship."

Vietnam are in Group K of the Qualifiers with Brunei, India and regional rivals Thailand.

Vietnam's chances of winning the group - which will confirm qualification for the Final - is boosted by the fact that Thailand have already qualified by virtue of being the host.

Park, however, said Vietnam can't take their opponents for granted and will approach the Qualifiers with focus and determination.

Qualifying for the 2020 AFC U23 Championship Finals will take Vietnam a step closer to qualifying for the Olympics, a feat they have never achieved and getting to Tokyo won't be easy as the Continent's best will all be challenging for places.

With Japan already having qualified as host, three places will be at stake in the 2020 AFC U23 Championship Thailand and Park is determined that Vietnam get a spot.

There is, however, a decision he has to make as Park admitted that managing the senior and U23 teams has taken a toll on him.

"I want to select and focus on coaching one team this year," he said.

The main challenge for the senior side will be the 2022 FIFA World Cup Qualifiers which kick off later this year while the U23 squad will have the 2019 SEA Games in November before the 2020 AFC U23 Championship Thailand.

Vietnam have not won the Sea Games gold since unification and the only triumph prior to that was in 1959 with South Vietnam emerging champions.

Steering Vietnam to the regional gold medal and to the 2020 Tokyo Olympics may well see Park deciding to focus on the U23 squad and create more history for Vietnam football.Source: the-afc.com