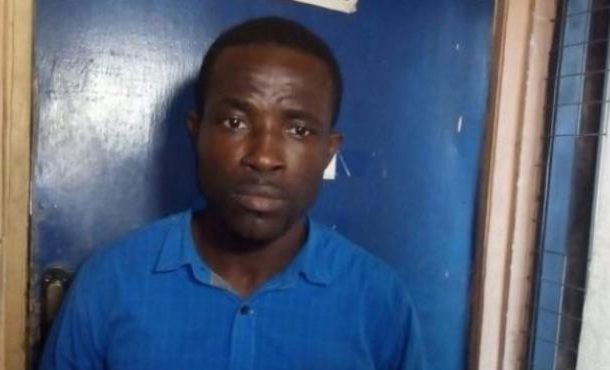 The founder and leader of Faith Word Church International at Nii Boi Town in Accra has been arrested by the police for allegedly rubbing olive oil in the vagina and on the clitoris of his church member.

Pastor Edmond Kakrae Agyei, according to the Tesano police, claimed he was casting out evil spirits that had possessed the victim by applying the oil in her private part.

After the act, the pastor allegedly attempted to rape the victim but she reportedly shouted for help and managed to escape.

Pastor Edmond Kakrae Agyei has provisionally been charged for indecent assault and breach of trust.

The Tesano Divisional Crime Officer, DSP Aba-Afari, who confirmed the incident to DAILY GUIDE, said the victim is an 18-year-old Senior High School graduate who fellowships with her parents in that church.

The pastor confided in the victim’s mother (named withheld) after church service on Sunday, August 28, 2016 that God had revealed to him through a vision that her daughter was possessed with an evil spirit.

He requested the woman to allow the girl come for deliverance service on Tuesday, August 30.

On that Tuesday, the mother of the victim asked her daughter to go for service but when the victim got to the church, the pastor requested that they go to his house for the said deliverance to be carried out and the victim obliged.

At his residence, the pastor allegedly asked the victim if she had ever accepted any love proposal from a man but she answered in the negative.

“Pastor Edmond Kakrae Agyei again asked the victim if she had experienced menstrual pains before and the victim answered in the affirmative,” DSP Aba-Afari narrated.

The police officer said the founder of the church then told the victim that the menstrual pains were the work of the devil and that he could deliver her by smearing anointing oil on her navel.

The pastor then ordered the victim to lie down and remove her dress while he rubbed the oil on her naval and parts of her abdomen.

The suspect further asked the victim to remove her pants and he rubbed the oil on the victim’s vagina and clitoris.

When the victim asked him to explain his actions, the pastor allegedly said he was being directed by the Holy Spirit to do so.

The 18-year-old victim resisted and attempted to stand up.

The victim overpowered the pastor, came out of his room and reported the matter to her parents in the house.

A compliant was later lodged with the police which led to his arrest.