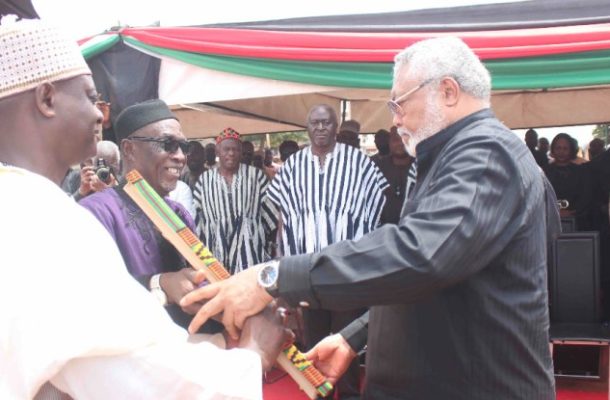 Former president Jerry John Rawlings and Ibrahim Mahama on Saturday August 11,2018 visited Peter Mensah, an eight-year-old boy who had both legs amputated in 2017 after a vehicle run over him on his way home from school.

Peter who had multiple surgeries, including the amputation, graft and plastic surgery, responded positively to treatment and has since been discharged from the Komfo Anokye Teaching Hospital where he was treated for months.

The former President first visited Peter Mensah at the Komfo Anokye Hospital in November last year after witnessing the ‘pitiful’ video of Peter being lifted into a taxi with his limbs hanging off his body.

Mensah’s grandmother informed the former President that plans were afoot to fit the boy with prosthetic limbs to enable him walk.

He currently moves around in a wheelchair.

Former President Rawlings and Ibrahim Mahama along with others also visited Peter Anaafi Mensah, a former Ashanti Regional Minister who is on admission at the Komfo Anokye Teaching Hospital with serious injuries after a vehicle parked at his residence released its brakes and knocked him down, trapping him for a considerable period before he was rescued.

The former Minister expressed his gratitude to the former President and his delegation and stated that he was responding positively to treatment.

The delegation were  in the Ashanti Region to bid farewell to Alhaji Gado Sulemana, a leading member of the National Democratic Congress (NDC) at a ceremony in Asawase, Kumasi.

Alhaji Gado Sulemana who until his demise on July 23 played various roles in the NDC including being Asawase Constituency Chairman, member of the Ashanti Regional Council of Elders of the party, National Advisor to the NDC and Chairman of the Pioneers.

Accompanied by General Secretary Johnson Asiedu Nketia, Alfred and Ibrahim Mahama, brothers of former President Mahama, Colonel Kabu Davies and Kofi Aikins, the former President and founder of the NDC, first called on Hajia Memuna Salifu, widow of the deceased to commiserate with her before moving on to the grounds for the final funeral rites.