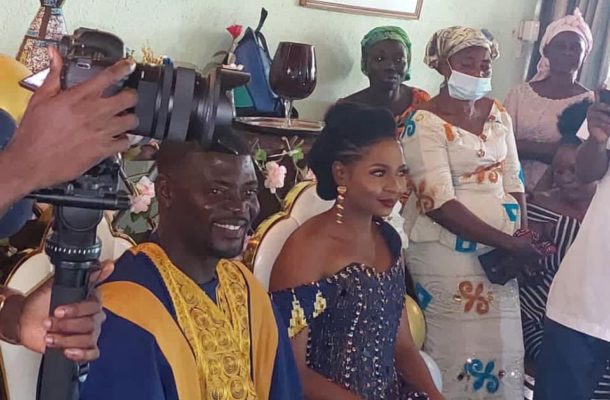 Accra Hearts of Oak Coach Samuel Boadu has married his fiancée Felicia Apimppanta in Kumasi in a ceremony on Friday, 13th August 2021.

The 35-year-old led the Phobians to end a 12-year-old trophy draught and also won the MTN FA Cup to seal a domestic double.

The wedding ceremony will be held at the Pentecost International Worship Centre at Asokwa - Kumasi on Saturday 14th August,2021.

Boadu is now the reigning best tactician on the local scene after guiding Ghanaian giants Hearts of Oak to a domestic double the sixth time in their history.

The 2020/21 Ghana Premier League title triumph is Boadu's first-ever in his managerial career.

Medeama gave him the rare opportunity in 2017 as he was appointed head coach but resigned prior to the start of the second phase of the 2020/21 season's campaign.

He took up the Hearts of Oak job midway through the season when the club was occupying 7th position.

Despite the club being in a precarious position, the 35-year-old gaffer worked hard to deliver the elusive 21st Premier League title and the MTN FA Cup.

VIDEO OF THE TRADITIONAL MARRIAGE BELOW: