Player caught having sex in toilet 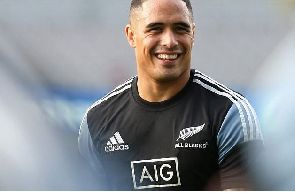 All Blacks star Aaron Smith has offered a tearful apology after a couple heard him having sex in a disabled bathroom with a female friend.

Smith has been suspended by the All Blacks for this weekend’s Test in South Africa and has flown home to New Zealand.

‘I’ve made a huge mistake, a huge error in judgement,’ a visibly shaken Smith said.

‘I’d personally like to say a huge sorry to my partner Teagan, her family, my family… also sorry to my team-mates and the New Zealand fans.’

‘My behaviour is unacceptable and if you could respect me and my partner in this situation…’I’m just trying to get home to deal with this. Thank you.’

The couple told stuff.co.nz they heard ‘rhythmic tapping noises’ coming from a cubicle in Christchurch airport as they stood outside after seeing him and the woman entering within 30 seconds of each other.

One of the witnesses said their young son did not know what was happening but it was ‘obvious’ what was unfolding.

They said the pair were inside the bathroom for about 10 minutes before Smith emerged adjusting his clothing and the woman followed about 30 seconds later.

The couple also caught Smith and the woman on camera after they carried out their bathroom rendezvous, which happened last month.