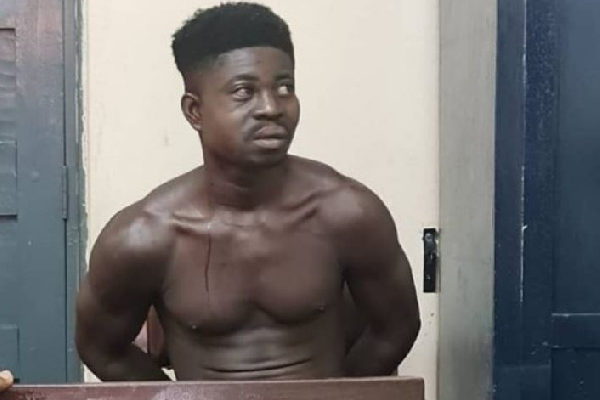 The suspect, Prince Adu aka Draculaa was arrested on Thursday

The Ho Police have arrested a notorious armed robber, who has been on the Police wanted list for several years, in an operation.

Prince Adu, 30, aka 'Dracula' unemployed, was arrested on Thursday at his hideout while asleep after he robbed an Immigration officer at gun-point at about 0230 hours.

Assistant Superintendent of Police (ASP), Mr Alexander Yeboah, acting Ho Municipal Commander, who confirmed the arrest to the Ghana News Agency, said Adu has been on the Police wanted list for years.

He said Dracula accosted the Immigration officer around the KK House traffic light when he attempted to travel to Accra for duties with the suspect frightening him with a dummy corked gun.

He said after collecting all these items the suspect then ordered the victim to 'go' while cranking the gun.

He narrated Adu then vanished into the darkness, leaving the confused officer to his woes, who later made a report to the Police.

He said a reliable informant in the day blew the cover of the suspect, leading to his arrest, with brief resistance.

ASP Yeboah said a search in the room revealed two jack-knifes and other implements being used for operations and some substances believed to be 'weed' recovered.

He said Adu would be arraigned as soon as investigations were completed and urged the public around Ho, who had suffered from robbery and rape to assist the Police by coming to identify the suspect.

He said the Police had spent a lot of money towards the arrest of the suspect and urged the public to share information that may lead to the arrest of such recalcitrant criminals in society.

ASP Yeboah said the suspect claimed he had wanted to surrender to the Police at a time but some members of the public discouraged him from doing so.

The suspect said his motivation is to take care of his son and wife.