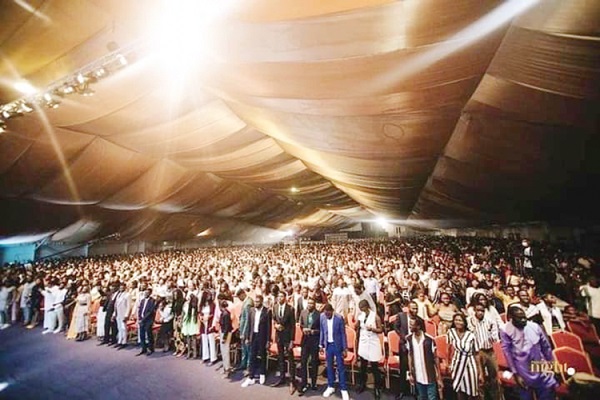 The police yesterday invited for questioning, the leaders of a charismatic church, Christ Embassy Church in Ghana, over an alleged gathering by the youth of the church who blatantly disregarded the COVID-19 safety protocols at an event at the Fantasy Dome, Trade Fair Centre in Accra last Friday, April 30.

Also, the management of the venue was invited for questioning as part of police investigation over a trending video of the alleged gathering, dubbed: "Pneumatic Night" which showed an event that had a mass crowd in attendance but without face masks and were seen screaming, chanting and dancing to the "evangelism" which was considered a super spreader event for COVID-19.

Additionally, the police yesterday laid surveillance and ensured that a similar event held at the Christ Embassy Service Centre at UPSA took place with all the COVID-19 protocols being observed.

A statement from the police, signed by the Director of Public Affairs of the Ghana Police Service, Superintendent of Police Mrs Sheilla Kessie Abayie-Buckman, stressed that people found culpable would be made to face the law accordingly.

The video, which trended last Saturday and yesterday, showed a fully-packed air-conditioned dome of excited youth who were engrossed in their worship, in a manner similar to church crusades and conventions before the pre-COVID-19 times.

The event has attracted wide condemnation from the general public with a call from a pressure group, Occupy Ghana, calling for a probe.

Occupy Ghana, in a statement, questioned how the event, reportedly organised by the Airport City branch of the church, was allowed to take place, given the head pastor Chris Oyakhilome’s stance on the virus.

“We are shocked that the authorities could either actively or negligently allow this event to be held in Accra, especially by a religious organisation whose leader actively denies the virus and preaches against the protocols.

“The government must answer to Ghanaians whether or not this event was held on its blind side, and if so, how that was possible. Were the police present at the event, and if not, why?

“Were the venue owners present, and did they take any steps to prevent or stop this?” it questioned.

The statement from Mrs Abayie-Buckman said though such mass gathering at a public place required police security, that was not the case at the event at the Fantasy Dome as the police were neither informed nor asked to provide security.

"The police did not provide security for the said event. In fact, the organisers did not give notice of the event to any police officer or station.

"The event, advertised as a church service, which ordinarily did not require notice under the Public Order Act, was organised at the blind side of the police,” the statement indicated.

The communications regulator in the United Kingdom, Ofcom, last month fined a Christian broadcaster £125,000 after it breached the rules by airing “inaccurate and potentially harmful claims about coronavirus”.