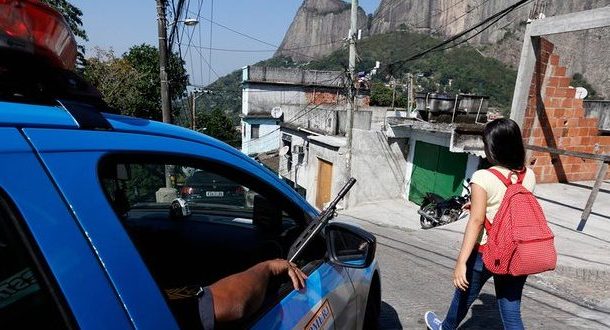 While much of the world’s media has focused on US swimmer Ryan Lochte’s fabricated account of an armed robbery, the real victims of Olympic crime in Rio de Janeiro are the city’s poorest residents, caught on the frontline of conflict between the authorities and drug traffickers.

Since the start of the Olympics, local media have reported at least 14 deaths in shootouts between gang members and police or soldiers from the 85,000-member security force deployed for the Games.

While such high levels of violence have long been a fact of life in favela communities, many residents feel the situation has been made worse by the high-profile mega-event that has focused police on protecting rich foreign visitors and targeting poor local residents.

Certainly, the heightened tension of the Games has led to at least one fatal mistake with devastating repercussions.

Helio Andrade, a state trooper from the distant state of Roraima, was shot dead on 12 August after he mistakenly drove into Vila de João, a gang-controlled neighbourhood in the Complexo do Maré favela. As a soldier on Olympic duty, his death was cause for interim president Michel Temer to declare national mourning and for flags outside the Games venues to fly at half-mast.

As is often the case in Rio, it also prompted the police to launch an extensive and punitive hunt for the killers. At least five residents of Maré were killed in the operations, though the suspects have yet to be apprehended. Images of the area in the local media show that it came under a state of semi-siege, with police helicopters flying overhead and homes raided by heavily armed military police.

The day before the Guardian visited the community, two people had been shot in the latest police action, according to local residents, who said they were woken up on many days by the sound of helicopters buzzing close overhead. “It’s horribly loud,” said Bruno Rodrigues, who, like many local people, asked to be identified with a pseudonym for fear of repercussions. “Everyone in the community is afraid when they hear that as it means an operation is about to start.”

Unlike many other favelas in Rio, Vila de João has never been “pacified” by police. On one street stands a gangster from the Terceiro Comando Puro, or Pure Third Command faction, one of Maré’s biggest drug trafficking gangs, with a semiautomatic rifle slung around his neck and a handgun jammed into the top of his trousers. Further along, there are lookouts carrying walkie talkies.

At the site of Andrade’s shooting near the junction of the airport motorway, the walls on one side of the street are marked with words “Paz” (peace) and “Seja bem vindo para Vila da João” (Welcome to Vila da João). On the other is a small pitch where a group of youths are playing volleyball. It looks tranquil, but Rodrigues warns me we are being watched. “Don’t take pictures. Don’t point,” he advises me.

The initials “TCP” sprayed on the walls are the only visible sign that this is gang-controlled territory. Most taxi drivers avoid the area; those who must come here do so with their car windows wound down and their hands visible so they can show they are not a threat.

But it is all too easy for strangers like Andrade to wander in accidentally; the state trooper was far from the first to be killed by a wrong turn.

In 2013, engineer Gil Barbosa, 53, was shot dead by gang members when he tried to use the junction to return home. Occasional shootouts across the motorwayhave left the walls on the roadside pitted with bullet holes. Traffic jams are sometimes targeted by armed robbers who work their way methodically along the line of immobilized vehicles.

During the Olympics, with athletes, officials and visiting dignitaries travelling back and forth between the airport and the city centre, the authorities have flooded the route with troops. Every 15 minutes or so, military patrols drive past with trucks carrying soldiers in full battle gear and brandishing rifles.

“The security is to protect them from us,” says Rodrigues. “The Olympics is for those on the outside. Those who have money.”

His views appear to be widely shared in Maré. “The police don’t come here to protect us, but to segregate us,” says Jeferson Luciano, a participant in a community theatre group, called Teatro do Oprimado na Maré – the theatre of the oppressed in Maré.

On social networks, community activists expressed condolences for Andrade’s death, but said the violent police action that followed was disproportionate, disruptive and failed to discriminate between criminals and innocent residents.

“Until now, the balance is five people dead, several injured and thousands of people prevented from working, studying, because they are scared, terrified and their homes are being invaded … The name of this is genocide, extermination, slaughter. And nobody says anything,” read one post on the Maré Vive Facebook page, which informs residents about shootouts and other issues.

Gizele Martins, another Maré resident, said there were similar problems in other favelas, even those that were supposed to have been “pacified” by police units. For her, it is simply about control.

“The legacy we have of mega-events in Maré is blood on the floor,” she said. “These Games do not include favelas, peripheral communities and the poor. We are only supposed to work, to serve, not to have fun.”

Well before the Games began, human rights organisations warned of the potential dangers. Amnesty said Rio’s police had killed over 2,500 people since the Games were awarded in 2009, including more than 100 this year, most of whom were young black men. It said crackdowns tended to increase during mega-events.

The Olympics has not been all bad for communities like Maré. In contrast to the stigma they usually incur, the opening ceremony included a positive favela-themed section.

Brazil’s first gold medal – won by a black female judoka and former resident of the City of God favela – also helped to challenge old stereotypes. But hopes that the Games might help to pacify the communities are far from being realised. Official statistics suggest crime in Rio has fallen over the past decade, but it has started to rise again in the past two years as a result of a worsening economy and – some locals claim – the extra pressure of the Olympics.

“As in ancient Greece, I thought the Games were supposed to bring peace, but that didn’t work here,” wrote Maré resident Bira Carvalho. “Unlike the Olympic shooting competition, the targets here are black people who are scared to death.”