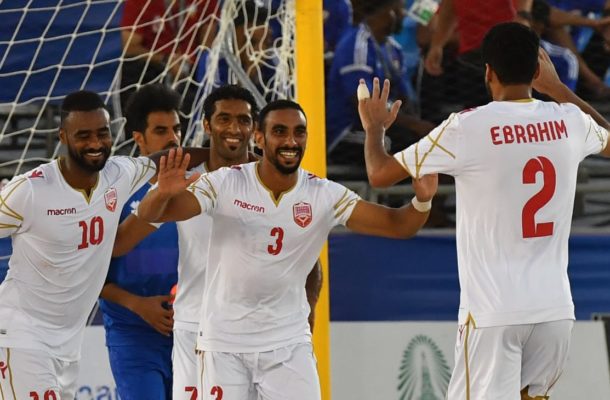 Pattaya: Bahrain's charge to the AFC Beach Soccer Championship Thailand 2019 quarter-finals comes as no surprise to head coach Mahmood Al Ghawi, who revealed he is happy for opponents to take his side lightly in the competition.


The West Asian nation are one of only six Asian teams to have been to FIFA Beach Soccer World Cup, in 2006 and 2009, but the lack of a local league and a paucity of recent matches meant they were not initially expected to be among the major contenders in Pattaya.

That suits Al Ghawi perfectly, who said - ahead of his side's Matchday Three clash with Japan - that keeping expectations low prior to the tournament was all part of a strategy.

"That was my plan, and it has worked," he declared.

"What I said before is true. We don't have a league, everything was right. We trained for three or four months."

"But I was also confirming with my team that I know we can win, I know we can go further and further. So my plan was to let every team think Bahrain is weak, but they know now (that we are not).

Back to back 5-2 wins over Qatar and Kuwait mean Bahrain are now in a position to potentially win Group C, with another victory against the star-studded Japanese outfit all that is required to make it a reality.

For Al Ghawi, that is very much the planned outcome.

"You know, I said before, it's step by step. Qatar, Kuwait, Japan, and I will tell you the truth. I want to be first in my group," he said.

"I want to win all the games. It's my plan. So if my plan works, we'll go the final Insha'Allah."

While Bahrain are full of confidence, they will have to make do without suspended captain Mohamed Ashoor, and deal with a Japanese side that has scored 15 goals in their opening two matches, with tournament top scorer Shusei Yamauchi (five) and captain Ozu Moreira (four) bagging nine between them.

But despite their two handsome wins, the latest of which was a 7-1 thrashing of Qatar, Japan head coach Ruy Ramos remains unimpressed by the performances he's seen so far in Thailand, and believes his side has a lot more potential than are currently showing.

"We do respect Qatar, but even if the score was 10 or 12-1, in terms of preparation for the next game I'm not really satisfied with how we played," said the decorated former 11-a-side professional.

"After the first goal we lost, which wasn't the plan, the mood changed when we made it even, but the mood only continued until the third period, so I can't be satisfied."

Meanwhile, Qatar and Kuwait will battle for pride in the late match, with both sides looking to return home with points in the bag after being eliminated by their respective Matchday Two defeats.

Qatar conceded five of Japan's seven goals in the second period on Matchday Two, but their overall performance was a vast improvement on the 14-0 drubbing they suffered against the same opposition two years ago.

Head coach Ahmed is heartened by the progress being made by Qatar, and believes the development he craves is slowly occurring.

"Believe me, this is not like football on grass. You need to have your mentality very high, and you need to have a lot of experience and more power." he said.

"My team went maybe one month and a half without any friendly games, and when you lose the concentration and make a lot of mistakes, this can happen."

"The first period (against Japan) was 2-1, the last period 0-0. The most important thing is my players learn something for the future."

While that may be case, there is no doubt Jassim craves a winning finale against the Kuwaitis.

"I respect this (Kuwait) team, and they've improved also, but I need to make something from this tournament," he said.

"We need three points and we will try to get it. The motivation is there for our players and our staff."

The match may serve as the international swansong for several of Kuwait's senior players, with boss Ahmed Abdelrazek indicating his preference to overhaul the squad with younger players at tournament's end.