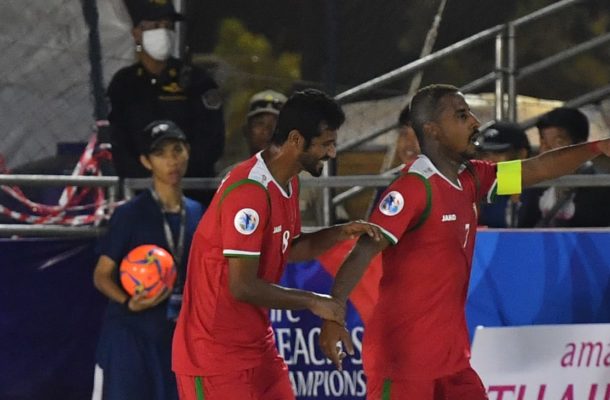 Pattaya: Oman are not in Thailand just to make up the numbers, with head coach Talib Hilal calling for his side to continue their strong start at the AFC Beach Soccer Championship 2019 in their Matchday Three clash with holders Islamic Republic of Iran.


A 6-3 win over Iraq in their first outing has sealed Oman's progression to the last eight, but they will arrive in the quarter-finals as group winners if they take points against the defending champions and world number two on Tuesday.

Oman are chasing not only the Asian title, but one of three places up for grabs at this year's FIFA Beach Soccer World Cup in Paraguay; a stage they reached in 2011 and 2015.

Hilal is a deeply experienced figure in the Omani beach game, and he believes there is no reason why his side cannot make a third trip in eight years to the global Finals.

"Every match is important from first to last," he said.

"Against Iran, we know we are going to play one of the best teams in the world. They're (ranked) second in the world. But we are ready.

"We are not here to participate in this event. We came here to qualify for the World Cup, and we will do our best to make sure we are reaching far.

"We will be ready for Iran. We will play against a very strong team who we have played many times. So we know each other, but we'll do our best."

Goal difference cruelly robbed Oman of a place in the semi-finals in 2017, but they remain one of Asia's genuine contenders, a status underlined by their fast start and eventual win over Iraq.

The Omanis had led by an even more commanding 6-1 score line with just four minutes remaining, before they allowed a final Iraqi flourish which bore two late goals.

Hilal didn't allow his side's forgettable finish to detract from what was an overwhelmingly positive introduction to the tournament.

"It's something that can happen with players. If you score 6, 7 goals, they relax," he said.

"We didn't keep the same standard. We relaxed, but at the end its important that we won, because it was a very important match. Our first match in a tournament is always difficult but we won, we played well, so now we are looking for the next match."

Iran remain among the favourites to become Asian champions in Pattaya, getting their campaign up and running with a 5-2 win which saw the likes of Mohammad Ali Mokhtari and Mohammad Ahmadzadeh find the net against Iraq on Friday.

Both sides navigated their first match without any medical or disciplinary problems, meaning Iran and Oman both have their full complement of players for the group-deciding match.