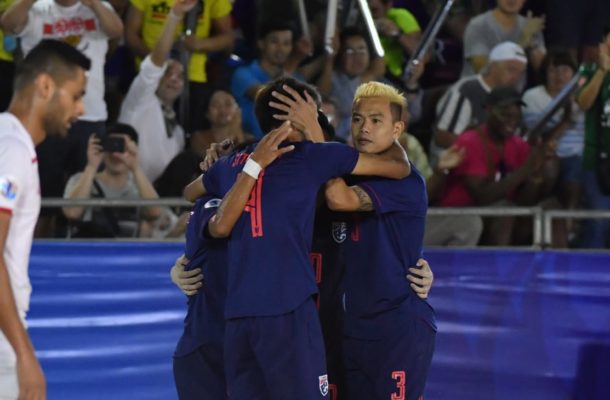 Pattaya: After slumping to an opening night defeat against Palestine, Thailand head coach Abolfazl Khodabandehloo believes his side are well equipped to bounce back against Malaysia on Matchday Two of the AFC Beach Soccer Championship 2019 on Saturday.


A forgettable seven-minute spell in the second period cost Thailand four goals in Thursday's opener, with Palestine taking full advantage to secure all three points with a 5-2 win.

The Thais have the experience of beating Malaysia 5-3 in the AFF Beach Soccer Championship last November, and Khodabandehloo is confident they will bounce back against a more familiar opponent in Saturday's must win match.

"We are here to win against Malaysia. The tournament is not over for us; it is just starting," he declared.

"The problem with the first game was that nobody knows about Palestine. We were seeing them for the first time. It was like closing your eyes and jumping into the water because there was no game of theirs to analyse.

"Malaysia, we know them, and we know all the other teams, so we won't have a problem with that again."

"For my team? I have to bring them back and show them their mistakes. We didn't play 10 percent of our capacity and capability (against Palestine)."

Khodabandehloo was left disappointed by his side's first performance, lamenting the costly errors that took victory out of their hands after a relatively promising start.

"In the first period we were good. In the second we collapsed, because we made mistakes," he said.

"We made three mistakes in the second period and let in four goals. There's not much you can do to help it.'

Malaysia are also fighting to keep their quarter-final hopes alive, after they suffered a 3-2 extra-time defeat to Afghanistan.

Mohammed Faizal So'od's side twice came from a goal down to take the match to three extra minutes, only to concede from the kick-off in extra-time, making Saturday's match a must-win proposition for both teams.

Meanwhile, Palestine will look to reinforce their status as group leaders, and secure a place in the knockout stage, with another win against Afghanistan in Saturday's earlier Group A clash.

Imadeldeen Hashim's side were highly impressive in their opening bout, but the Palestinian mentor said he was firmly focused on the future ahead of another important match.

"When I look forward to our second match, I will forget about what happened in the first match against Thailand," he said.

"We will prepare in the exactly the same way against Afghanistan."

Both Palestine and Afghanistan are chasing their first ever appearance at the FIFA Beach Soccer World Cup; a dream that will only be achieved with a top three finish in Thailand .