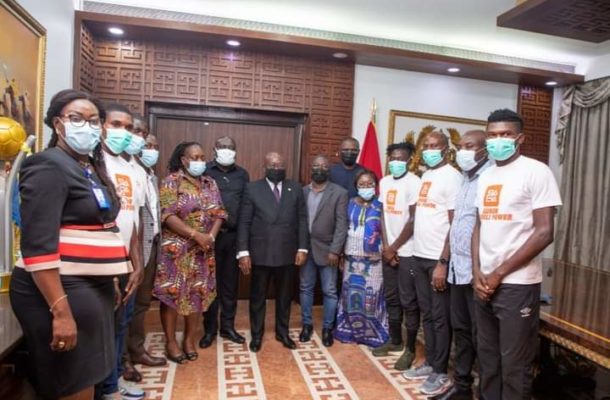 President of the Republic of Ghana, Nana Addo Dankwa Akufo-Addo has made a cash donation of GHC1million Ghana cedis to reigning Ghana Premier League champions Hearts of Oak.

The club on Tuesday afternoon paid a courtesy call on the President where they presented the two trophies that is the Ghana Premier League and the MTN FA Cup to the first gentleman of the land.

Hearts were supposed to have met the President before their 110th birthday but the meeting was called of at the eleventh hour.

Players ,technical team members and the hierarchy of Hearts of Oak were led to the presidency by the Minister for Youth and Sports Mustapha Ussif.

At the meeting the President donated an amount of GHC1million cedis to the rainbow club in order to help them fund their CAF Confederations Cup campaign.

Hearts started in the CAF Champions League but dropped down to the CAF Confederations Cup after they were eliminated 6-2 on aggregate by Moroccan side Wydad Athletic Club.

The Ghanaian champions will play against Algerian side JS Soura in the playoff round at the Accra Sports Stadium on Sunday, November 28, 2021 before the return fixture in the North African country a week later.