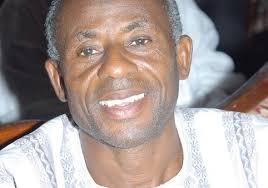 The Minister of Local Government and Rural Development, Alhaji Collins Dauda has kicked off speeches at the NDC campaign launch in Cape Coast saying President John Dramani Manama will score a “Messi-like goal” in the December 7 election.

He said a goal of such nature is incredibly crafted and it will hit the New Patriotic Party (Npp) so hard that “it will send the elephant into the bush.”

The elephant is the symbol of the NPP.

The Minister who is also the MP for Asutifi South, launched a blistering attack on the New Patriotic Party for employing lies and deceit in their campaign.

He accused the NPP flagbearer, Nana Addo Dankwa Akufo-Addo of failing to give his native Kyebi potable water when the NPP was in power.

He said it is the John Mahama government that gave the people of Kyebi and surrounding areas potable water.

Alhaji Dauda said President Mahama’s record was impeccable looking at what has been achieved in all sectors.