Protest erupts as Parliament votes on COVID rules in Germany 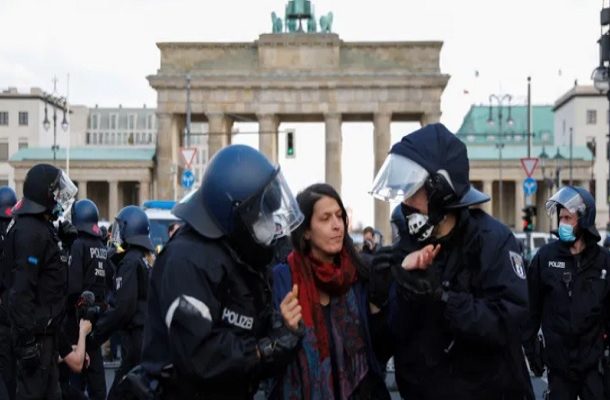 Thousands of protesters massed outside of Germany’s parliament on Wednesday as legislators voted in favour of a proposal to grant the government wider powers to tackle the coronavirus pandemic.

Chancellor Angela Merkel is seeking to amend the Infection Protection Act so federal authorities can force coronavirus lockdowns and curfews in areas with high infection rates, even if regional leaders resist them.

She has said the legislation is needed now with Germany “firmly” in the grips of a “third wave”, as case numbers rise in several parts of the country.

To date, a patchwork approach has characterised the pandemic response across Germany’s 16 states with lockdown measures decided at the state level.

Critics say this strategy has led to confusion, with governors interpreting rules agreed with the federal government in different ways, despite having similar infection rates.

The lower house of parliament voted 342-250 in favour of the amendment on Wednesday, with 64 abstentions. The upper house, where state governments are represented, is due to consider the proposed change on Thursday.

If approved, the amendment would apply until the end of June.

“As hard as it is, as sick of it as we are, reducing contact helps,” Health Minister Jens Spahn told legislators ahead of the vote.

“We are again seeing 5,000 COVID-19 intensive care patients and rising, with the age of the patients sinking,” Spahn said. “We want to avoid an overburdening of our health system, and overburdening that many of our neighbouring countries have experienced painfully.”

Police clash with protesters in Berlin

While the proceedings got underway in Berlin’s Reichstag building, outside, on the streets of the capital, about 8,000 protesters assembled nearby.

More than 2,000 police officers deployed to the scene to break up the gathering. Tear gas was used to disperse those in attendance, the AFP news agency reported.

Commenting on the scenes, Vice-Chancellor Olaf Scholz said in parliament there were “some people out there today on the streets of this city who say it isn’t serious and there’s almost nothing going on”.

“Because the situation is still serious, something must be done beyond what we have done so far.”

Passing the bill could prove to be an uphill battle for Merkel, with state governments reluctant to cede authority over healthcare to the federal administration.

As well as on the streets, there is opposition to the proposed law in parliament.

Alexander Gauland of the far-right Alternative for Germany party, which opposes lockdown measures in general, called it an “attack on rights of freedom, federalism and common sense” prior to Wednesday’s vote.

The Greens had different objections.

“This emergency brake remains too half-hearted, too ineffective, too inconsistent and too disproportionate,” legislator Maria Klein-Schmeink said.

The German government’s proposal would allow federal authorities to apply an “emergency brake” in regions where COVID-19 is judged to be surging rapidly.

That would lead to a uniform set of rules including a nighttime curfew, limits on physical contact and the closure of leisure and sports facilities. Access to shops would either be limited, or retailers would close altogether.

The measures would affect areas where there are more than 100 weekly new cases per 100,000 residents. Schools would have to switch to distance learning at a higher rate of 165.

Although there were wide regional variations, only one state had an incidence rate below 100 on Wednesday, while seven topped 165.