Qualifiers - Group A: Qatar fend off Oman to qualify 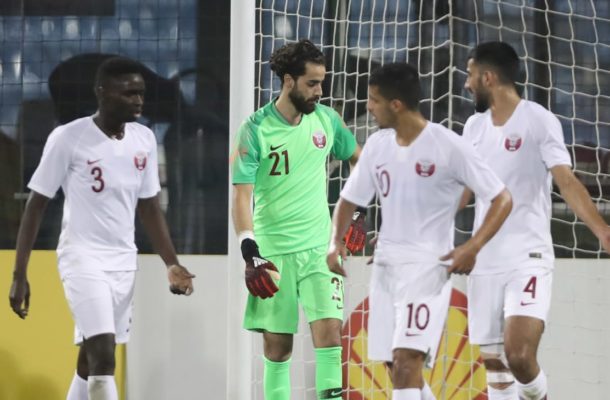 Doha: Qatar emerged from a compelling 2-2 draw with Oman to qualify as group winners, while Afghanistan finished with a win on the final day of AFC U23 Championship Thailand 2020 qualifying Group A.

A second half brace from Hassan Ahmed Palang proved crucial for Qatar, who survived an early scare to seal a 2-2 draw and claim a ticket to Thailand 2020 ahead of Oman on goal difference.

The result leaves Oman on the brink of elimination from the qualification race, with their fate to confirmed at the conclusion of all of Tuesday's matches.

Qatar came into the match fresh from a stunning 5-0 win over Nepal, and it took an excellent low save from Ibrahim Al Mukhaini to prevent them from taking a 15th-minute lead, after Abdullah Al Ahrak had cleverly supplied Amro Surag.

Al Mukhaini's intervention seemed even more important when Oman scored five minutes later thanks to a booming header from Amran Al Hidi, which Qatar goalkeeper Yazan Hussein got a hand to, but couldn't keep out.

That goal put Qatar's qualification hopes into a precarious position, and those hopes looked in disarray, for a moment at least, when Muhsen Al Ghassani found the net in the 43rd minute, but the hosts were given a reprieve as the goal was ruled out for offside.

A brilliant curling effort from Surag hit the upright in the final minute of the first half, but Qatar only had to wait until five minutes into the second half to find the precious equaliser, with Palang showing great poise and no shortage of strength to steer a header past Al Mukhaini for 1-1.

Qatar only needed a draw to secure their qualification, but Palang put them into a commanding position when he latched on to a superb Al Ahrak delivery to score another header - and give his side the lead - in the 73rd minute, but Oman refused to wilt, and they equalised when Saud Al Habsi produced a fantastic header of his own four minutes later.

Oman needed one more goal to win the match, top the group, and salvage their campaign but they faced an uphill battle when Asad Al Awadi was shown a second yellow card with three minutes remaining, and Qatar held firm to ensure the Asian senior champions will be there to contest the Continental Under-23 title next January.
NEPAL 0-2 AFGHANISTAN

Meanwhile, Afghanistan ended their campaign with the joy of a parting win, as they accounted for Nepal 2-0 in the battle of the already-eliminated teams.

After competitive outings against both Qatar and Oman, Afghanistan secured their first points of the competition thanks to two first half goals, leaving Nepal to finish their campaign without a point.

Afghanistan scored the game's opening goal through Suliman Shah Khorami, who got onto the end of Nematullah Karimi's measured pass to beat Arpan Karki from close range in the 24th minute.

Khorami then turned provider 10 minutes later, supplying a pass from the left flank which found Ahmad Haydary, who had the simple task of finishing from 10 yards.