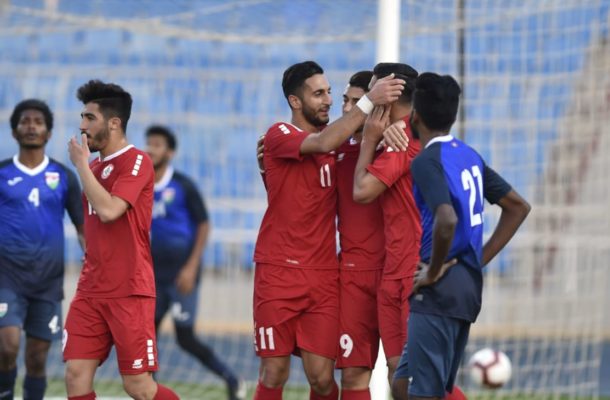 Riyadh: Lebanon salvaged some pride from their ill-fated AFC U23 Championship Thailand 2020 qualification bid, surging to an emphatic 6-0 win over Maldives at the Prince Faisal bin Fahd Stadium on Tuesday.


The Cedars shrugged off back to back losses to go on a scoring spree in their final fixture, finding the net twice in the first half, and four more times in the second, as six separate players beat Maldivian goalkeeper Huassin Sahreef.

Lebanon's blitz began with a goal to captain Mohamad Kdouh in the 24th minute, before Karim Darwich added a second just two minutes later to have the West Asian side well clear at half-time.

The gap became a chasm after the break, as Milic Curcic's side ran riot with four goals in a dazzling 23-minute spell.

Hassan Mehanna scored the third goal in the 59th minute, followed by another from Hussein Monzer three minutes later, before Youssef Al Haj made it 5-0 at the 75th-minute mark.

Substitute Alex Boutros applied the finishing touch to the rout with a sixth goal eight minutes from time, as Lebanon signed their campaign off on a positive note.