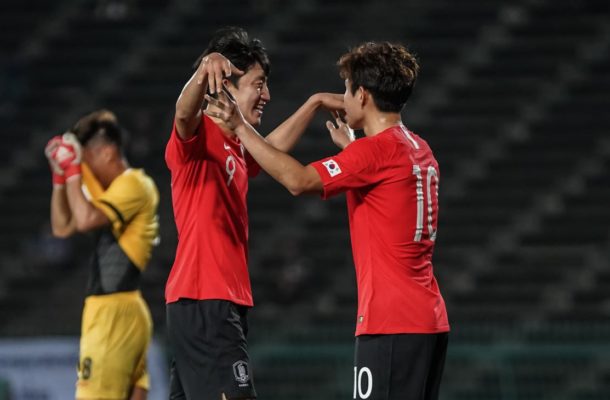 Phnom Penh: Korea Republic got their AFC U23 Championship Thailand 2020 Qualifiers off to a spectacular start after beating Chinese Taipei 8-0 at the National Olympic Stadium on Friday.


Their dominance began as early as the 14th minute when Lee Dong-jun converted a spot-kick to open the scoring, before finding the back of the net again in the 33rd minute.

The 2018 semi-finalists tripled their lead before going into the break when Seo Gyeong-ju etched his name on the scoresheet in the 39th minute.

Chinese Taipei head coach Von Ca Nhum tried to reduce the deficit by bringing in Wang Chung-Yu and Tsou Yu-Chieh after the break, but Korea Republic continued their dominance to make it 5-0 with back-to-back goals from Lee Se-heon and Cho Young-wook in the 68th and 69th minutes respectively.

However, it was Lee Dong-gyeong who stole the show when he completed his hat-trick with three goals in the 72nd, 73rd and 85th minutes to seal an emphatic win over their East Asian rivals.