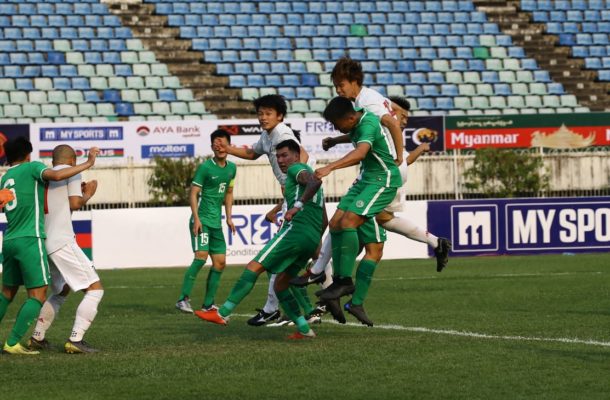 Yangon: Japan opened their AFC U23 Championship Thailand 2020 qualifying campaign in resounding fashion after securing a 8-0 win over Macau at the Thuwunna Stadium on Friday.


Ayase Ueda's hat-trick spurred Japan to their first win of their qualifying campaign in Group I, as they will face Timor-Leste next on Sunday, while Macau will be aiming to bounce back when they take on Myanmar.

The East Asians imposed themselves early in the match and despite having the bulk of possession, the Japanese found it hard to break down their opponents with only a shot on goal.

Macau were comfortable soaking up the pressure at the back as they braved waves of Japan attacks to keep the score goalless at half-time.

Any hope of keeping the Japanese at bay were quickly diminished in the second half as Macau found themselves under heavy pressure from their opponents.


Japan broke the deadlock five minutes after the restart after Koki Machida's strike and doubled their lead four minutes later through Ueda.

Ueda scored Japan’s third at the hour mark to take a 3-0 lead, but the East Asians were not content as they turned up the tempo as the floodgates opened with further strikes.

Japan showed their class scoring four goals in six minutes through Keita Endo and Daizen Maeda in the 67th minute and 69th minute respectively, while Ueda completed his hat-trick on the 71st minute followed by Maeda's strike a minute later.

You Itakura added further gloss to the scoreline with his strike in added time to give the young Samurai Blue a comprehensive victory.Source: the-afc.com