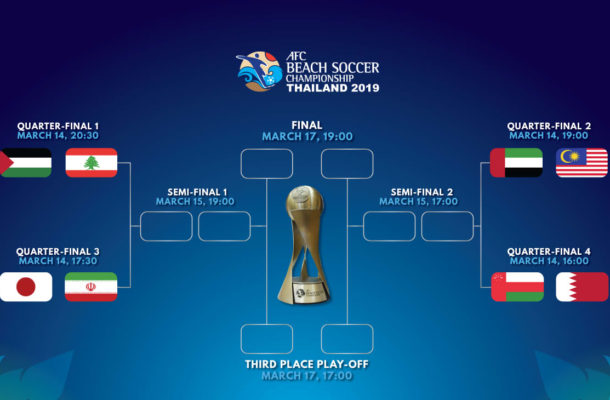 Pattaya: After a thrilling group stage which delivered spectacular goals and memorable matches, the eight remaining sides at the AFC Beach Soccer Championship Thailand 2019 can now look ahead to the quarter-finals.


With the title of Asian champions, and three places at the FIFA Beach Soccer World Cup in Paraguay, up for grabs, there will plenty on the line when the Continent's top teams go toe to toe in Thursday's blockbuster four-match schedule.

Oman's stunning 4-3 win over defending champions Islamic Republic of Iran confirmed their status as Group D winners, as they issued a warning to the rest of the competition.

The stage is now set for a last-eight showdown with Mahmoud Al Ghawi's Bahrain, with the winners to face either UAE or Malaysia.

QF3: JAPAN v ISLAMIC REPUBLIC OF IRAN, 17:30
Japan eased through the group stage with a hat-trick of commanding wins, but their reward for topping Group C is a quarter-final against 2017 World Cup semi-finalists and world number two Iran.

Team Melli suffered a narrow loss to Oman on the final day of the first stage, but head coach Marco Octavio still firmly believes his side can retain the title of Asian champions in Pattaya.

QF2: UNITED ARAB EMIRATES v MALAYSIA, 19:00
Runners-up in the 2017 Championship, UAE breezed through the opening stage with three wins, although they had to come from 2-0 down to beat Lebanon in order to top the group.

Lebanon have been one of the revelations of the tournament, defeating hosts Thailand on the opening night and continuing on with wins over Afghanistan and Malaysia.

Imadeldeen Hasim's side are now two wins away from the World Cup, but they must overcome an experienced Lebanon looking to atone for their semi-final defeat in Malaysia two years ago.